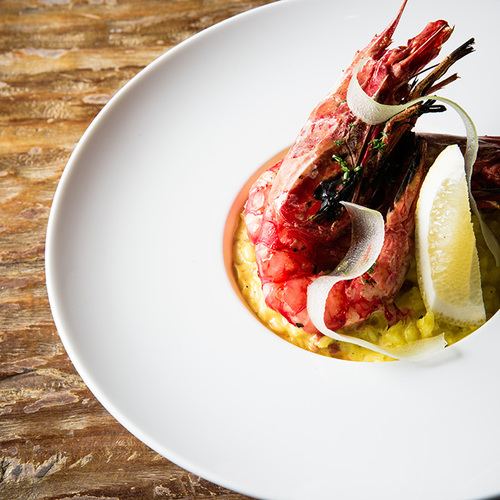 “A meat obsession; from bone marrow to venison loin”

Free of Pretense, Packed with Personality

Claim to fame: A meat obsession; from bone marrow to venison loin

To look out for: Artful, Thai-inspired cocktails

So close yet so far away, Eat Me hides in plain sight, on a leafy side street just beyond the tourist honky-tonk of Patpong, an oasis of gourmet sophistication that’s been around for nearly two decades. Reflecting its Aussie management, the atmosphere is warm yet casually unpretentious and the food, in the sure hands of sharp-shooter American Chef Tim Butler, continues to be among Bangkok’s most quietly, yet consistently, innovative.

Butler’s style used to be called “fusion.” A dirty word these days. It’s sometimes called “modern” or “progressive”, but what do these terms really mean? Spelled out plainly on a minimalist menu that describes each dish like a mathematical formula, the Eat Me experience means several of the world’s finest, most pungent and powerful ingredients, lovingly sourced and scrupulously combined in new ways that leap across borders and challenge the ordinary. Humbly, Butler terms it “putting together stuff that tastes really good.”

Once a pastry chef for Marcus Samuelsson and named a “rising young chef” in New York, Butler’s stay in Asia has clearly piqued his interest in and admiration for Asian elements. At the same time, he’s clearly a closeted, Italophile. Or is that Iberophile? Who cares when faced with plates of sustainable caviar, sea urchin pappardelle, Iberico pork pluma, and tamarind glazed quail? Butler is a “Plenty-ophile” when it comes to Thai touches, mixing the orthodox with the pagan, dazzling his diners with ground “laab” salad of, wagyu and lemongrass roast chicken.

And thanks to the Australians, Eat Me’s beverage choices are definitely top-level, including an astounding profusion of bar creations like the Siam daiquiri, passion fruit caipiroska, and something called Lemmy’s Whiskers. There’s practically every influence on earth here and all it fairly begs, “Drink Me”, “Eat Me.”