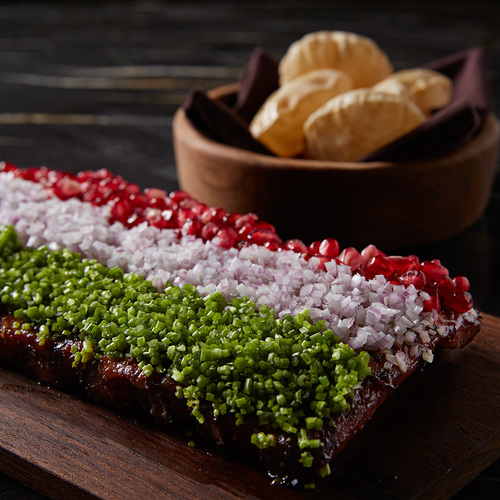 “A Gaggan Spin-off That Goes Beyond”

Claim to fame: A Gaggan Spin-off That Goes Beyond

Reason to go: Sweet Crayfish and Pomelo on Indian “Krakha”

To look out for: Rare Indigenous Ingredients Like “Egg Fruit” Ice Cream

In a perfect you-go-girl-move, Chef Garima Gaa stepped out of madcap molecular genius Gaggan’s kitchen and opened a space of her own, directly across the shaded alley that houses her much-awarded now ex-boss’ eponymous restaurant. Gaa is not the first spin-off of creative culinary energy by a kitchen alumnus of Asia’s number-one eatery, but it’s the first and only one helmed by a female chef. Recently opened and shyly hanging its shingle above a barely-transformed office, this is a restaurant born of a confident ability to uniquely showcase local ingredients.

Perhaps befitting a woman’s modestly deft approach, and her prior training at Copenhagen’s famed, ultra-natural Noma, Arora’s tasting menus  – with a choice of 10 to 15 miniature yet complexity-packed creations – seem a cavalcade of Thai-ness willed to serve the highest forms of delicacy. In place of showy test tubes or mock charcoal, she prefers to play with subtle ironies. Charred baby corn is delectably dipped in a corn milk; a crunchy potato mochi is reminiscent of a Jewish knish yet topped with mustard flower; a mouthful of perfectly warmed crab is matched with softened cauliflower and Royal Project caviar; and slivers of frozen chicken liver literally melt in the mouth as they play against the sweetness of fresh longan meat. The Thai mango is honored with a chilled soup, the freshness of Thai seafood stuffed in a tuile-like taco.

Service is almost too attentive, led by a scrupulous female sommelier. The décor of whitewashed concrete seems too bare and haphazard to match the plates’ sophistication.

As with Gaggan, Chef Arora seems to have stumbled on culinary liberation in Thailand, yet she cannot help dropping playful hints of her South Asian origins. She pays homage to her most recent mentor with a grilled betel leaf informed by duck stock and plucked from a mock “tree” as well as the trompe l’oeil of a perfectly French cinnamon snail bun, that at first bite, transports you with its spices to the street corners of her native Mumbai. But Garima’s Gaa – an acronym for her name, also meaning “crow” in Thai —  is no mere Gaggan taste-alike, staying honest to flavor combinations over fancy flourishes.