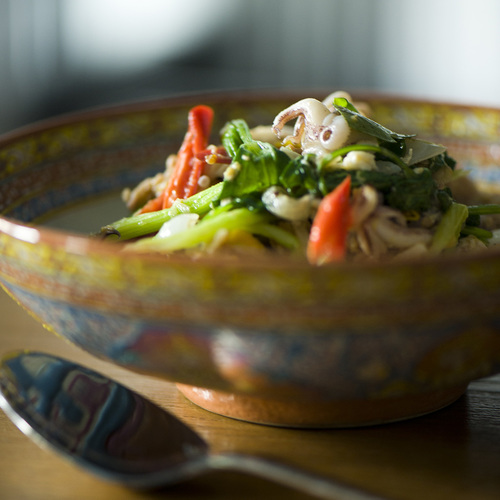 “Authenticity straight from the authority”

The Future of Thai Food Defined by Ancient Recipes

Claim to fame: Authenticity straight from the authority

Some years back, when impudent Aussie David Thompson had established widely-awarded Thai restaurants in Sydney and London, before he spent years scrupulously researching two massive volumes that serve as bibles for authentic techniques and recipes, there was still some debate as to whether this farang (Westerner) could indeed be the world’s leading proponent and preservationist of Thai cuisine. That debate quickly became very old hat when Thompson opened Nahm, the elegant showplace in the trendy Metropolitan Hotel that proved beyond any reasonable doubt that his dishes really were as much, if not more, local than the locals’ versions of the same.

Having settled that score, Thompson recently handed over the helm to Pim Techmuanvivit, the restaurant’s first female chef, who inherited the pursuit of evolving Thai gastronomy based on its rich heritage.

Though Nahm’s menu draws heavily on historical texts and sources, it is not, however, your run of the mill, corner noodle shop-Thai food, nor the kind of fancy fare that one of the hundred-odd children of King Chulalongkorn would have made. It’s no-holds-barred, take-no-prisoners Thai cuisine in the heart of mechanized Bangkok. And, over the years, though the menu offerings have been simplified to a degree for easier ordering, the food that arrives is guaranteed to be as complex as modern Asia and as pure as the white porcelain that bears it––whether appetizers like egg nets with prawns, wild almonds and kaffir lime, oft-neglected soups like coconut and oxtail with red shallots, brilliantly brightened-up salads like kingfish with pomelo, lemongrass and lime or tried-and-true entrées like a spicy curry of minced prawns with yellow eggplants and holy basil. Be forewarned, when the waiter says something is spicy, it truly is, and when the kitchen puts out a plain ol’ curry it will be like nothing you’ve ever slurped before. All this takes place in a high-design atmosphere purposely internationalized and without the slightest hint of elephants, Buddhas or other Thai kitsch, with service maintained at meticulously high level. Wines and drinks are superbly matched upon request, though Nahm––which depending on the context means water as well as juice or sauce, or anything liquid––doesn’t need to draw customers with faddish beverage concoctions.