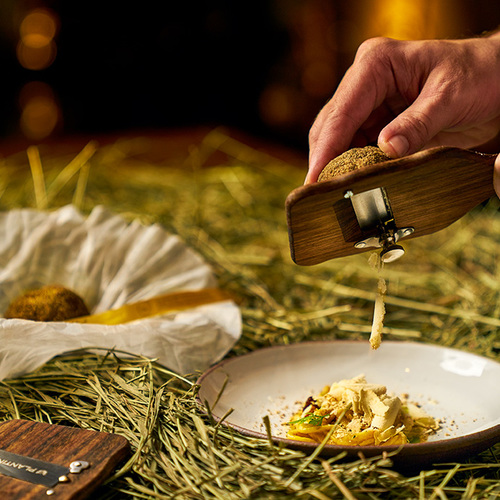 To look out for: Remarkable cheese plates & non-risible Rieslings

In a town where most German food is served up to please busloads of beer-swilling tourists, what are the odds of finding a truly innovative, cutting edge approach to Teutonic fine dining? They’re about the same as the odds of indistinguishable identical twins Thomas and Matthias Sühring both becoming professional chefs and winding up together in Thailand to work in a high-end hotel restaurant before mustering up the courage to break away and do their own thing.

Set in a pleasantly remodeled private house on a leafy street in the residential, near-silent Yen Akat district, the eponymous Sühring is obviously an enterprise infused with the love of Germany that has brought to fruition the twins’ long-held, coupled dream. Unquestionably among the city’s hottest new openings of 2016, the restaurant has been raising eyebrows and titillating taste buds of foodies seeking to encounter – or attempting to debunk – the very notion of an elevated German cuisine.

Tasting menus of eight-to-twelve dishes. Delicate plating. Extensive Alsatian wine selection. In-house sausage and pastry making. It’s all there. No effort has been spared to show that the twins’ simple yet revolutionary home cooking is about way more than pork knuckle and kraut. There’s Hungarian foie gras and rarely found cheeses to go with the usual pickles, and everywhere, a celebration of the green apple, seemingly their trademark ingredient, whether matched with potato, eel, wurst or worse. Smoked trout and white asparagus is more classic, while a Caesar salad is turned into green liquid spheres placed on chicken skin. Baking is outstanding, from the usual pretzels to the more uncommon tomato bread. The comfort food course known simply as brotzeit – literally, “bread time” – proves among the highlights for many. Presentation is elegant, and yes, the resulting dishes are decidedly on the light side.

The twins are ever present, making sure to lend a personal, Germanic touch to the teams of sweetly calm Thai servers. Of course there’s sauerkraut, elevated with champagne, natürlich.