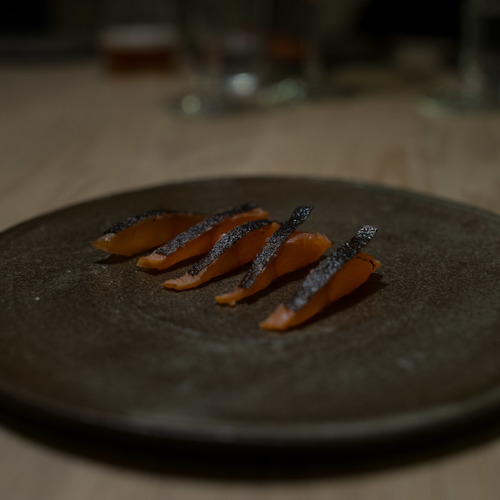 To look out for: The rapid development of this fiercely promising and very young restaurant.

The end of the summer of 2017 marked the much-anticipated move of mythical dining project Ernst, from a private apartment setting to a proper restaurant on the Southern tip of Wedding’s Gerichtstraße. Scoring a seat at one of Chef Dylan Watson-Brawn’s secretive and legendary dinners was virtually impossible, now it’s a simple phone call away.

Ring the doorbell and find 24-year old Canadian chef prodigy Dylan Watson-Brawn masterminding restrained and highly immersive showcases of flavor minimalism for 12 guests per night. The whole experience is set around a wooden maple counter where diners witness all cooking and plating. Dylan Watson-Brawn is a Japanese-trained chef who makes no compromises when it comes to sourcing ingredients and bringing out the very best in them. Small plates will arrive at a pace comparable only to high-end sushi bars in Japan, though compositions are predominantly vegetable-based here. A bit of fresh cheese, churned a mere hour before service, will dissolve on your tongue along with some smoked rapeseed oil. You’ll understand why Berlin was once famous for its freshwater fish as you tuck into the eel that’s been killed using the ike jime technique before it was grilled to succulent perfection on a Japanese binchotan grill.

While Watson-Brawn and his Sous Chef Spencer Christenson explain the nature and origin of every item served, host and sommelier Christoph Geyler will match the food with his exciting and surprisingly sophisticated, contemporary and low intervention wines from Germany and France. The fiercely hungry and ambitious restaurant migrated its concept to the new restaurant setting with immediate success and Ernst is, without a doubt, one of the most innovative and groundbreaking restaurants Germany has seen to date.