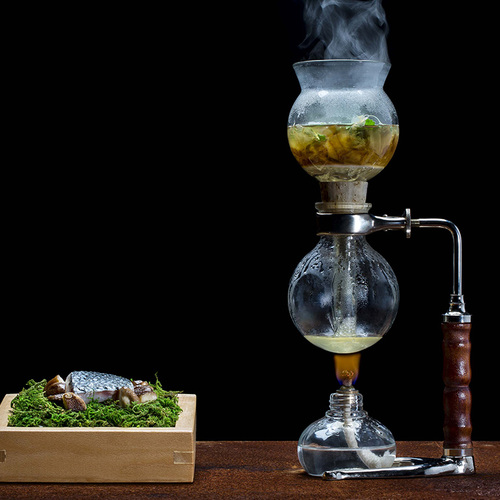 “Not so much mad as local”

Not so much mad as local

Claim to fame: Alexandre Silva at the apogee of his kitchen career

Reason to go: A suave aesthetic that doesn’t splash and jab

To look out for: The heritage whole wheat bread baked in-house

We’re in Portugal, so ‘loco’ doesn’t mean ‘mad’ as it does in Spanish.  Alexandre Silva, chef/owner of Loco, instead intends ‘place’––as in the Latin ‘in loco’. He is one of the post-2000 group of Portuguese star chefs and was formerly at the much-loved Bocca, he won the Portuguese TV competition Top Chef in 2012, and subsequently headed the kitchen at Bica do Sapato and elsewhere before opening his own place––first a smaller venture at Mercado da Ribeira and then, his dream coming true, here.

As locations go, his Loco is slightly off the beaten track, behind the landmark Estrela basilica in west central Lisbon. It’s a theatrical space, dark but precisely lit, with one wall covered in diamond-shaped, pointed white tiles echoing a famous 16th-century Lisbon façade in the Alfama district. The 22-seat dining room feels bigger than it is, yet it’s dwarfed by the matte black, open and strangely hushed kitchen.

From that apparently clinical space emerges, almost miraculously, a menu (currently there is only one) of 17 courses, composed at the restaurant’s discretion but taking any special prior requests (food allergies et al) into account. As at many of Lisbon’s fine dining restaurants (Alma is one, and of course Belcanto), it celebrates Portuguese ingredients and culinary traditions by using a panoply of modern cooking technologies, methods and concepts to produce a decidedly untraditional result. It also indulges the current fad for Japanese flavors and textures, and employs a Portuguese take on the Japanese concept of micro seasons.

Presentations are unfussily pretty, with a suave aesthetic to match the space. Service is affable and not too encyclopaedic. And, last but emphatically not least, flavors are distinctive, delivered with a clarity and confidence that bespeak knowledge and hard work in the kitchen lab. A tartare of horse mackerel is frankly (and freshly) fishy; a long-salted cod confit served with black garlic purée extracts further aroma from the fish skin, contrasting this with citric herbs. A granita of pomegranate captures the color and flavor of the fruit perfectly, softening its acidity with coconut slivers and ice cream.

The meal makes a delicious pause for bread. This is baked on the premises, of heritage whole wheat and sourdough, and is crusty and comforting enough to make you want to take it home (unfortunately you can’t, but there are a few bakeries in Lisbon that bake similarly lovely loaves––ask the staff). In fact, the bread can be said to perfectly illustrate Alexandre Silva’s ambition to take ‘what’s here, and make the very best of it’.

Wines are exclusively Portuguese, and the selection demonstrates the variety of the country’s production, from the rocky north and the Atlantic-cooled central highlands to the salt-splashed coastal vineyards west of Lisbon and the blistering southern plains. Guests can opt for preselected wine pairings, genially presented by the soft-spoken sommelier, as well as interesting non-alcoholic beverages concocted in the restaurant’s lab.

‘Mad’ is ‘louco’ in Portuguese, by the way, and pronounced pretty much the same way as ‘loco’.