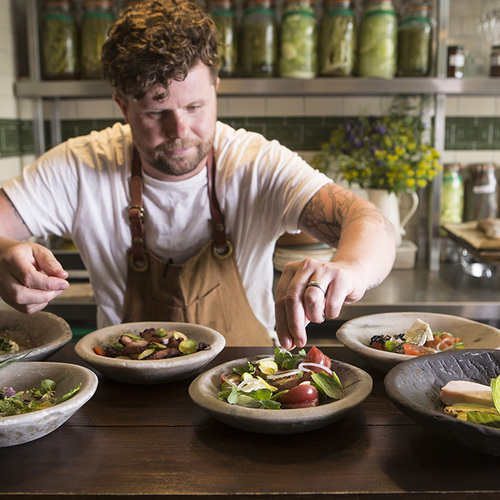 Ferments, pickles and cures for what ails you

Claim to fame: Next-door bijou branch of the acclaimed The Dairy

Reason to go: Stand-out culinary skills and innovation without pretense

To look out for: Custom cultivated greens

In Sweden they call them bakficka: the ‘back pocket’ bistros that are cheaper, livelier and more casual than a big-name chef’s main restaurant. Just like Counter Culture. Irish-born Chef Robin Gill’s low-key sliver of an eatery in Clapham attracts savvy locals while the big spenders dine next door, at lauded The Dairy wine bar and restaurant; Gill is one of London’s finest chefs. Counter Culture, with its chummy Irish staff, shares a Dairy-like approach to dishes but is less of a hassle to book, even though it has a mere baker’s dozen of bar stools.

The menu changes daily and offers fewer than ten dishes. Portions are small, so two diners can order the entire menu if sharing. Gill’s chefs, including Coco, a tattooed lady who usually runs the show, are enthusiasts of pickling, fermenting and preserving. The Dairy and Counter Culture have their own vegetable grower outside London, allowing them to cultivate oddities such as Red Meat radishes that have white skins, but are beetroot-dark within. They turn up sliced thin with Gailcian octopus that has been slow-cooked for 15 hours, served with a romesco sauce that gives the dish a Spanish point on the compass.

Italy is the inspiration for the two types of salami served with a vegetable pickle, but don’t think these cured delights come from the land of San Daniele and sophistication, they’re made next door by The Dairy. Even the smear of ’nduja, the slab of irresistible sour potato flatbread and the cultured cream are made in-house. There’s another nod to Italy with gnudi, the light ricotta filling encased in a thin skin of pliable semolina; but the accompanying mash of celeriac with slivers of roast Jerusalem artichoke are entirely Counter Culture’s own.

Dessert aficionados will adore the chocolate-orange pairing of a scoop of chocolate crèmeux laced with orange curd, balanced on a bed of hazelnut and coffee bean crumbs. If you prefer savory endings, Durrus is one of the best washed-rind cow’s milk cheeses made in Ireland, served with toasted sourdough and ripe pear slices.

Counter Culture started off as a BYO, and you can still bring your own wine for a £10 corkage fee. But the addition of The Dairy’s wine list now gives plenty of good options by the glass, including a skin-contact chardonnay from Friuli Venezia Giulia that works well with the complex flavors of many of the dishes. Counter Culture is the kind of place you’ll want to be a regular at.