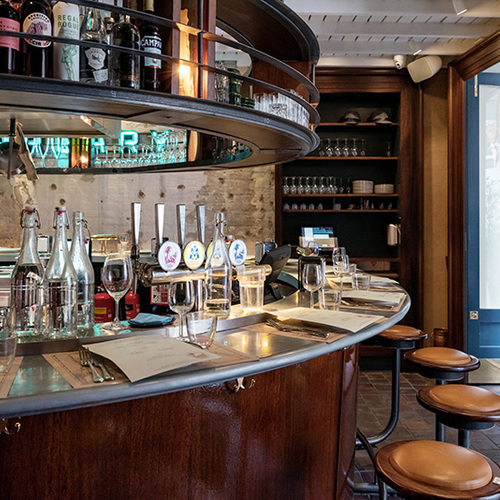 Maghrebi and Levantine flavors with a side of Tel Avivian flair

Reason to go: The char-grilled octopus tentacle with mango labneh

To look out for: The crowds and the lively and un-British atmosphere

With no reservations taken you just show up at Barbary, put your name down, then stand on the periphery of the horseshoe-shaped kitchen counter – and people watch. There’s a high bar to lean against as a vantage point. The scene is unlike any other in London: Levantine lovelies taking selfies, thespians remonstrating, wait staff slaking the thirsty, and kitchen staff producing manna from heaven for the masses. A wait of nearly an hour for a seat at the counter passes swiftly with an enticing drinks list and fast service. While standing you can nibble from the short menu of bar snacks that includes arayes, the Lebanese meat-stuffed pitta pockets. These, and many other dishes, are grilled on ingenious triple-decked charcoal grills that would singe eyebrows if they were any closer.

Chef Eyal Jagermann is ever-present and was previously sous-chef at Palomar, a fashionable though more formal sister restaurant in Chinatown. As at Palomar, Jagermann’s interpretation of Tel Aviv style dining continues to be disruptive. Dishes are inspired by the cooking of the Sephardic Jewish diaspora that used to run along the North African and Levantine coasts, which explains the Barbary Coast antique map printed on the paper placemats. Sephardic is the starting point, but the kitchen here is not kosher. Pork appears in the form of pata negra neck char-grilled to smokiness, pepped up with date molasses, some ras-al-hanout spicing and firm garlic cloves. A fat tentacle of octopus is charred before you, then topped with mashawsha, a lighter version of hummus originally from Galilee; yet this isn’t what makes the dish extraordinary. A slick of labneh decorates the plate, but the taste is Indian. Amchoor – a dried Indian spice made from under-ripe green mangoes – flavors the yogurt, giving it a spectrum of aromas that pay homage to the Phoenician spice routes. The menu’s tersely worded and not always easy to decode. ‘Ikra’ is the Russian word for roe, loaned to modern Hebrew. This cod roe dip is smooth, salty and intense; the umami hit needing no other accompaniment than the slivers of radish and garnish of diced red onion. Ikra pairs well with Jerusalem bagel, a light ring of bread that’s baked not boiled, the top laced with sesame seeds; it’s perfect for scooping up dips, and comes with a tiny paper wrap of za’atar if you want to spice things up. If you make it as far as dessert, opt for the baklava, the version of this Ottoman Empire remnant is a tangle of kadayif pastry freshly fried before you, then topped with crushed pistachio seeds and slices of orange: sublime. While dishes such as these are both innovative and lip-smackingly wonderful, the lasting impression of Barbary will be the manically upbeat atmosphere, more like a hip Tel Aviv eatery than a garden variety London restaurant. Yet service is the definition of hospitable; staff are eager to please and efficient, and after an hour or two you’re likely to be on first-name basis with them.