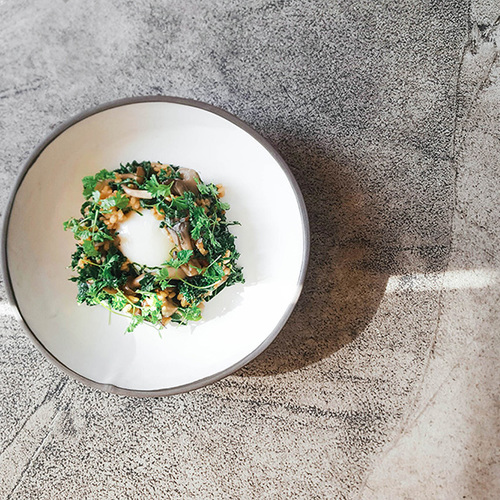 “Innovative fare in an unlikely location”

Claim to fame: Innovative fare in an unlikely location

Reason to go: The satisfaction of discovering a star in the making before everyone else does

To look out for: Kato’s lack of liquor license is a triviality, though the food would shine if paired with sake or wine

Kato is a badly kept secret, a restaurant hidden in plain sight, in a wheezing strip mall, next to a couple of questionable eateries, below a sketchy massage parlor. It’s a lowbrow place that fits beautifully into the anonymity of this forlorn stretch of Santa Monica Blvd. Chef-Owner Jonathan Yao seems to have no need for grand gestures, his laidback staff is amicable and looks like it just got out of a crafting class, his sparse dining room has all the charm of a Scandinavian dentist’s foyer, but we mean that in the best possible way; blonde wood and barely decorated walls, soft lighting and a welcoming vibe, it’s perfectly designed to not distract from Yao’s artful fare, a six- or a ten-course tasting menu that links Taiwan and Japan with California.

Here’s the remarkable thing about Yao’s technique-driven cuisine, save for a few stages at heavy hitters such as Alma and Coi, this young chef is completely self-taught. So by all means, opt for his extended menu, some day it’ll give you bragging rights: “Sure, I ate Jonathan Yao’s ten course menu before he became a culinary bigwig.” To point out some of his minor kinks is almost unfair, Yao can’t be compared to his more established, experienced peers, yet he’s well on his way to playing in their league.

Seafood and vegetables are the stars of Yao’s savory repertoire, his signature dish of lightly smoked hamachi and pickled cucumber is a supernova made extra bright with a shiso chiffonade, a well balanced opener pinned on a night sky of charred scallion sauce whose black drama taints a white plate. Bringing things back to earth is a dish of cold soba noodles with clams, calendula and raw fava beans in an ethereal tomato water-broth. It’s like a cool walk in a bamboo forest. Yaos’ octopus, however, falls short, curling around a dollop of chili- and broad bean fieriness that overpowers the tender tentacle.

Meat only makes an appearance on the ten-course menu, surprisingly supple grilled short rib with pickled ramps, hiding under a blanket of nori crisp, dusted with kombu-powder. Rich and manly in its assertiveness, it begs to be followed by something daintier; a foie gras and strawberry jam charmer tucked between disks of childishly soft milk bread, slightly too big, but no match for our dining companion.

Desserts are another one of Yao’s fortes. This is where you’ll be thanking us you opted for the larger menu as you’ll score two more; wasabi semi freddo with matcha, lime and salted caramel as well as buttermilk pudding with hibiscus ice, both are splendid and not too sweet.

Lacking a liquor license, Kato’s drink options are straightforward, there’s a refreshing house-made strawberry soda, Taiwanese apple cider in a can and various teas, completely doable options even though Yao’s food would benefit from an adult-beverage pairing.