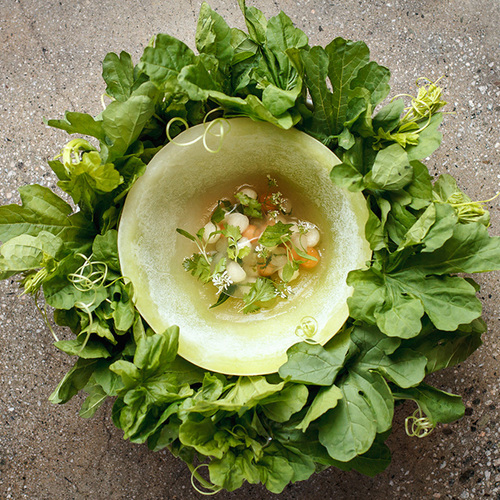 Socks knocked off in Beverly Hills

Reason to go: Daring the off-flavor borders of any season

To look out for: Granny Maude after radical make-over

”Welcome to my grandma’s house” is the sotto voce message Curtis Stone sends out at Maude. The restaurant, named after his paternal nana, has that nurturing coziness – dried roses, Windsor chairs, soft lighting and flea market dust collectors. But don’t worry, this 24-seater is by no means doily-dull, Maude isn’t fussy, we’re in Beverly Hills, of course there are glossy flourishes. And naturally the food isn’t grandma-smothering either, quite the opposite, Aussie Chef Stone and his Exec Chef Justin Hilbert offer vivid tableaux that are more contemporary art than Grandma Moses.

Up until now the set ten-course tasting menu has been created around one seasonal ingredient each month. Some courses feature the ingredient in broad brushstrokes, others in mere Chuck Close-pixels. This has been going on for three years, since the restaurant’s inception, next year, however, Stone and Hilbert will be trading their conceptual cooking style for something more non-figurative. Granny will re-appear as her own grand-daughter, Beverly Hills style.

The menu calendar has always culminated in a year-end truffle extravaganza. This year they boost the theme, with white truffle in November and black in December. The grand finale kicks off with a “Greatest Hits” menu in October, featuring iconic creations from the previous years, “reminiscing over flavor combinations that seemed dubious at first then ended up knocking our socks off” according to the Chefs. That’s what forward gastronomy is all about, testing the boundaries, crossing the borders – and resetting the standards along the way.

Recently, Maude’s seasonal addiction featured California’s bountiful September melons, including an Ellsworth Kelly checkerboard of avocado, five types of melon and Santa Barbara sea urchin-custard, a “flavorific” homage to the region. A sculptural piece, titled “Leche de Tigre”, was presented in a bowl of frozen melon with a tiny, epazote-flecked mound of melon and jicama marbles, the cool icy vessel enhancing the dish’s highly acidic nature. Textures had the lead roles in a “spring roll” of compressed, 24-hour dehydrated watermelon stuffed with a creamy yet textural assemblage of king crab, jicama and carrot; like fruit leather with an ocean-sweet, Thai basil- and cilantro fragrant filling. A decidedly non-smarmy spelt fusilli (the only dish served on granny’s finest floral china) included artistically inventive smoked watermelon rind, delicately bordering on off-flavor. A Baja halibut was smeared with melon sofrito while the Hudson Valley dry aged duck breast got a funk of fermented – you guessed it – melon.