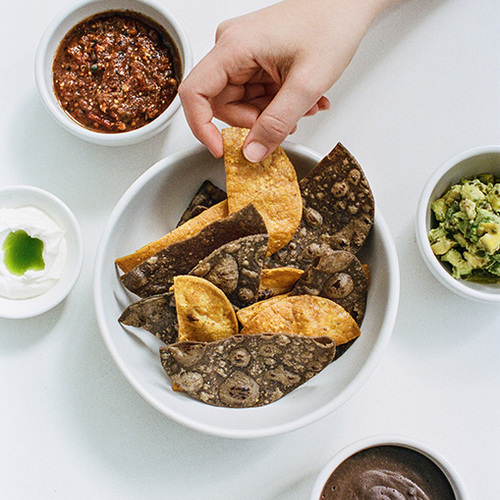 “Moreish and sharable food that both surprises and soothes”

Making Waves on the West Side

Claim to fame: Two fierce chicks in a cross-cultural collaboration

Reason to go: Moreish and sharable food that both surprises and soothes

To look out for: Inspired desserts, Onda is an offspring of LA’s lauded, sweets-centric Sqirl

It’s 4.50pm and there’s a cluster of hungry hopefuls waiting for Onda to open.  In Tinseltown, people actually eat dinner at 5pm, unlike Mexico City where diners are more nocturnal. But maybe that’s the only thing that sets Angelenos apart from their soul mates to the south. Onda, a collab between LA’s Jessica Koslow and Mexico City’s Gabriela Cámara, celebrates both metropolises’ love for colorful, deeply flavorful fare––in a quintessentially Cali way.  Koslow is the brains behind all-day hit Sqirl, the place that feeds Eastsiders brioche French toast and grain bowls galore; Cámara made her name with perpetually packed Contramar in CDMX’s tony Roma district. Together they created one of LA’s mot hotly anticipated eateries.

“There’s nothing on the walls,” marvels my dining companion. She’s right, Onda is a generous, white canvas on a windswept Santa Monica street corner, in the Proper Hotel. The streamlined dining room features sturdy wood and the open kitchen a hunk of roasting meat on a rotating spit. Better feast your eyes on the imaginative dishes that showcase the two chefs’ fortes: Cámara’s competence with seafood and Koslow’s penchant for ferments and the farmers market.  They’re on the same wavelength, or onda in Spanish.

Fish Hiding in Kelp is a fritto misto of corn masa-battered Pacific kelp, anchovies and meyer lemon, served with salsa verde, it’s a bite of salty, albeit slightly greasy, sea air and a conversation starter/intro to the inventive menu. The Halibut Tartare lingers on the palate; a textural confetti of tender fish cubes, minute morsels of raw daikon and turnips, as well as perky serranos dressed in a sunny citrus veil. The Inside Out Turkey Quesadilla is what any civilized, gourmet stoner would reach for when hit by the munchies; a riot of al pastor turkey (from said spit), burnt hoja santa, crispy oyster mushrooms and salsa verde, wrapped in a crunchy, melted cheese-topped tortilla. Messy, moreish, satisfying. Just like the sturdy, crispy-fatty, bo ssäm:ish Smoked Pork Jowl that guests are instructed to stuff into leaves of butter lettuce and top with fiery burnt pickles and habanero hot sauce. This is sharing food, it’s roll-up-your-sleeves-and-get-all-up-in-there-chow. The same goes for the tapioca-fried market fish, a whole catch of the day, bones and all, presented with house-made tortillas, sorrel and charred jalapeño sauce for a DIY-taco moment, ditto the Banana-Leaf-Steamed Black Cod, which, if we were sleuthing, has a certain sous-vide:esque silkiness. Some of these dishes are a tad too salty, all of them are both completely innovative yet curiously familiar, and thus totally comforting.

By 5.30pm the bare canvas-dining room is a tableau of chicster conviviality, the light is as warm as the waiters – in oh-so-right Eckhaus Latta-designed uniforms––are amicable.  And even though they won’t serve you either of the beverage list’s three amber wines by the glass, they will offer you a sharp cocktail from the drinks menu concocted by Kyle Bailey, formerly at New York’s tiny gem of a bar, Amor y Amargo. Incidentally and interestingly, quite a few of staff have been poached from high-profile places in that city on the so-called Wrong Coast.