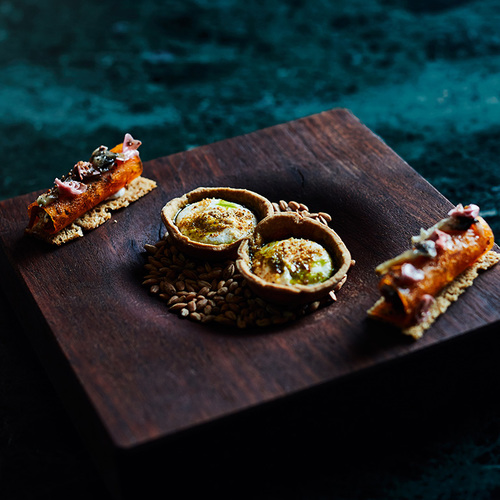 “A quiet riot of contemporary Australian cooking on a hot streak”

Claim to fame: A quiet riot of contemporary Australian cooking on a hot streak

Reason to go: Getting in now is tough; five years from now it may well be impossible

Look out for: Beautiful ceramics, all thrown by chef-owner Julian Hills

Julian Hills probably isn’t the only chef in the commonwealth of Australia with a fine-arts degree, but we’d hardly call it a trend. He’s a guy who likes to go his own way; he’s quietly spoken, but quite upfront about the fact that Navi is designed as much around him trying to strike a balance between work and life, as it’s about him looking to strike any blows for creative hospitality. Services run just for dinner Wednesday through Saturday, with a shortened Saturday afternoon “matinee” that kicks off at two o’clock, making time for Hills to be with his young family.

The Yarraville neighborhood in which Navi sits is very much on the up, its houses renovated, its footpaths rich in designer strollers, but a restaurant of this caliber still seems almost like a surprising find here. That hint of incongruity invites comparisons with Attica––now one of Australia’s most famous restaurants, but for many years something of a curiosity in its suburban Melbourne setting. A storefront room largely occluded from the street, a relatively spare interior, its capacity on the smaller side.

Nor do the comparisons end there. Snagging a seat at Attica can involve a certain amount of luck, and at Navi, where the format is all tasting and the seats relatively few, tables typically book out months in advance. So what’s the hook, when the city fairly bulges and throbs with dining opportunities of a high order that don’t require anywhere so much planning and organization? Damned fine cooking, that’s what.

A crisp macaron shell, shaded a chic charcoal by black garlic, makes the airy vehicle for a smart little sandwich of golden Yarra valley trout roe; on the same board, a whisper of a seaweed-rice cracker with a bare suggestion of smoked avocado. That theme of delicacy concealing full flavors is developed further with another snack that sees an eel parfait held in lacy wafers of apple caramel.

There’s a clever play of textures at work in a mushroom dish that lands early in the line-up. The slices of fungi are tweezed into a bowl in a careful strata of salt-roasted celeriac and Jerusalem artichoke, the artichoke’s skin a crisp (and tasty) ornament on the top. Curls of fermented (and essentially raw) potato, meanwhile, interleaved with preserved mussels crown a nicely cooked piece of snapper fillet.

“Navi” is a Cherokee word meaning “local”, and to this end Hills works with both foragers and small farms around Melbourne to source most of his ingredients. It’s a sensibility woven throughout the menu, but its balance of the wild and the cultivated reaches its apotheosis (today, at least) in Golden Plains pork with a ragù of wild fruits. The pork is the meat from the head of the pig, the cheek and jowl cooked separately until they’re giving, the rest combined in a sort of brawn. The kitchen enrobes these fatty, sticky, gelatinous cuts in sheets of caramelized radicchio, tops them with a crisp tangle of pig’s ear slivers and then doubles down on the radicchio’s bittersweetness, spooning on the native fruit ragù at the table, all herbaceous twang and berry pop. A splash of Brouilly from Dominique Piron underscores the effect.

Hills appears a thoroughly self-deprecating sort of person, and his table-side manners follow suit. The service is confident, but quiet. It’s the same story with the modest but savvy selection of wines by the glass, suggesting that the plate is the focus here above all.

Be that as it may, Navi is not blanketed in hush or muted by reverence. Its walls ring with the joy of discoveries and the laughter of friends.