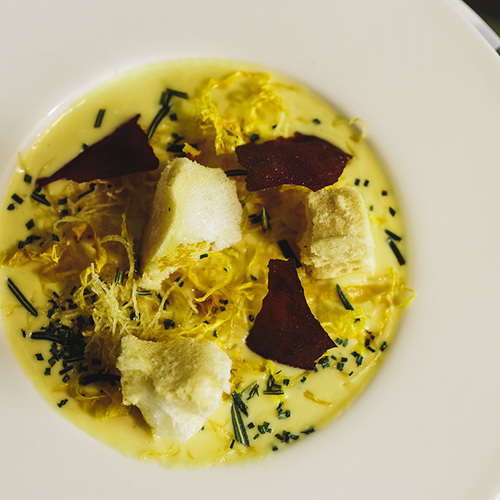 Legendary cocktails and not a glass of wine in sight

Reason to go: To join the followers of The Church of Holy-sterol

To look out for: Beef bacon as well as veal brains with egg yolk sauce

The best way to find this restaurant, hidden deep in Moscow’s underbelly, is to use a sniffer dog trained to uncover aged beef; huge chunks of meat (in a glass display case, granted) is the first thing that greets you behind the door with the “Thank you for finding us” sign. Once here, you merit a pit stop at the bar, ask for a Pedro Manhattan, the enigmatic cocktail served over seven thousand times; every new order is meter-counted.

The cocktails are legendary. Delicatessen (or simply Deli, as the regulars know it) is a gastro-bar at its best, with a bold and unconventional menu and a ready-for-doomsday stock of booze. Wines, however, are not a priority: Chef, Ivan Shishkin says he’s only interested in featuring his own creations, he’s not about to make wines any time soon. Trust us, you won’t miss them, the deft bartenders here can pair any dish you order with a tailor-made tipple.

What exactly does Chef Shishkin create? Finely hand-cut, fresh and fragrant horse-meat tartare seared with a hot iron. Literally, with an antique iron, brought tableside, together with the “meat of the horse, bred not for entertainment, but for the nourishment of the people”. That quote is from the glossary attached to the menu, incidentally. Diligent guests will find out that the pâte is “made from brains” and that this fact is not advertised on the menu “because then you wouldn’t dare to try it”, that “the new Margherita” pizza turns out to be new, because the chef added “tomatoes brined in a barrel” and “nobody has done it before”, that homemade spaghetti is apparently sprinkled with “sheep’s milk brynza ripened in sheepskin”, because “it tastes better that way”. Obviously the short names on the menu contradict the verbiage in the glossary. Although those who have known Shishkin for a long time are not in the least surprised. Ivan, who is known to his fans and followers as the Supreme Exarch of the World Church of Holy-sterol likes to preach to his goats, the glossary is his humble attempt to educate the flocks.

It’s easy to lose track of time in this windowless cellar where time is measured only by the clinging of the bartender’s shakers and by new logs disappearing into an old fireplace. Putin is President again and Deli is still standing. In Moscow, with its turbulence, there are two constants only.