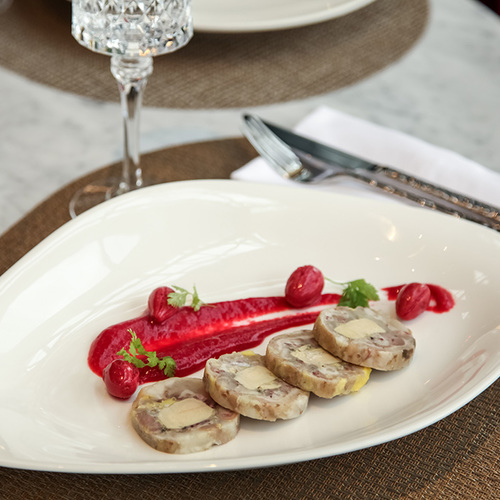 Reason to go: To check how slow-cooked Soviet nostalgia merges with the rocketing modernism of an American-designed park at the foot of the Kremlin

To look out for: Sterlet simmered in cucumber brine

Voskhod, on the grounds of the new über-hip Zaryadye park, is named after the Soviet spacecraft that prowled space in mid-sixties. The first multiple-crewman space mission, the first spacewalk––that was Voskhod. It’s a name that brings the restaurant squarely into the past, all the more so as the Brezhnev era-modernism’s interiors and cosmodrome-chic wait staff-outfits underline the Soviet nostalgia theme. So does the menu: it showcases the once seemingly indestructible friendship of the Soviet people. So what kind of gastronomic supernovas can you expect from this place?

The menu turns out to be quite creative, with many unexpected twists. At first glance, it consists of smash hits, much like a New Year’s Eve concert in Vienna, but with those Strauss tunes remixed by a popular DJ.

Satsivi, traditionally cooked with chicken or turkey, and one of the highlights of Georgian cuisine, is made with crayfish. Golubtsy, Russian cabbage rolls are stuffed with langoustine instead of beef or pork. Cherry dumplings, a seasonal Russian-Ukrainian treat, come with chokeberry.

It’s peculiar how just one note can change the tone of the dish; it sounds unorthodox, but hits all the right keys.

Take sturgeon. It’s usually simmered in a small amount of white wine or champagne; here they use cucumber brine, a traditional cure for champagne hangovers. Voskhod’s version of vitello tonnato, the Italian meat- and fish combo is a crafty one; proper tuna didn’t exist in the Soviet Union, but there were enough golden-smoked, oil-preserved Baltic sprats to feed the Red Army. Hence the marbled beef roast served with a sauce of said sprats––here’s your vitello tonnatsky, comrade!

The most exotic thing on the menu must surely be the meat platter, traditionally the center of a Soviet feast; chicken has been replaced by pheasant, beef by elk meat, salami is made from bear, and the spicy sausage? It’s camel. It feels exactly as if The Alexandrov Ensemble, the official choir of the Russian army, performed the Rolling Stones’ Satisfaction instead of Kalinka. Go ahead, enjoy these animal proteins with one of Voskhod’s many vodkas. Try the exquisite Snow Leopard, local oligarchs’ choice quaff, or a 500-euro bottle of Bachelor’s Shiraz, sourced from the South-Russian winery of Mikhail Nikolaev-junior, the bachelor himself.

Interestingly, all these retro-futuristic culinary ideas come not from Chef Maxim Tarusin, but from Renaissance man Alexander Rappoport who is first and foremost a famous corporate lawyer, but also a restaurateur, and an amateur chef who entertains his guests with the merging of cuisines and restaurant acquisitions.