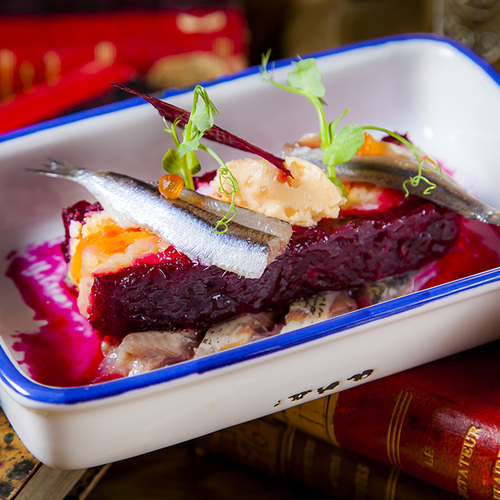 To look out for: Olivier in edible cellophane wrapping

The restaurateur Andrey Dellos was obviously born in the wrong place at the wrong time. His country should have been France, his time la belle époque. All the best Maison Dellos establishments (the legendary Café Pushkin and Turandot) clearly follow the French culinary tradition even though they serve Russian and Chinese cuisine. They are also always theatrical, Dellos is a member of the Russian Academy of Arts, after all. His restaurants are stages where a cornucopia of foods are eaten by actors with various degrees of talent. Despite Matryoshka being the most Russian of his projects, it’s still all about France, this time from the era of the Exposition Universelle and the construction of the Eiffel Tower.

The food though is 100% Russian, way more Russian than at Café Pushkin. The menu is based on Russian terroirs and brands such as Olyutor herring, Linda goose and Murmansk cod, as well as Russian dishes; pelmeni with crucian carp, Valaam shchi and Olivier salad, known to the rest of the world as ‘Russian salad’, but invented by a French chef in 19th century Moscow.

Most interestingly, the food fits the steampunk-theme as well. Chef Vlad Piskunov created the menu with a sense of gastronomic nostalgia and a touch of modernist technique; the original Olivier with quail and crayfish tails (the way it was intended by that French chef) is wrapped in a transparent gelatin casing, tartare is made of duck jerky, kulebyaka fish pie is served with smoked sour cream. Pickles include watermelon, beef Stroganoff is garnished with buckwheat- and mushroom flour noodles. None of it is revolutionary, but honestly, Russian cuisine was actually terminated in 1917, so reviving it with a fresh twist is already a great accomplishment.

The bar steams along in the same way; there’s a Buckwheat Gimlet (Dewar’s with buckwheat cordial) and something called Into the Woods (gin with birch sap), there’s an oat-milk based White Russian and a Bloody Maria with horseradish infused booze, to name but a few. The cocktails complement the food and give you a much brighter hangover than Riesling or just quarter century old Scotch. And again the Francophile footprint can be detected; Russian favorites like horseradish or cowberry liqueurs are made with the French (quelle surprise!) Grey Goose vodka.

Chef Piskunov is in some sense like Mikael Jonsson of Hedone. Neither one of them are professional chefs, they’re foodies who stepped into the kitchen because they couldn’t find a chef who’d meet their expectations. And, just like his Swedish colleague in London, Vlad keeps a popular food blog; his technical background is of much help in constructing, deconstructing and re-constructing the dishes.