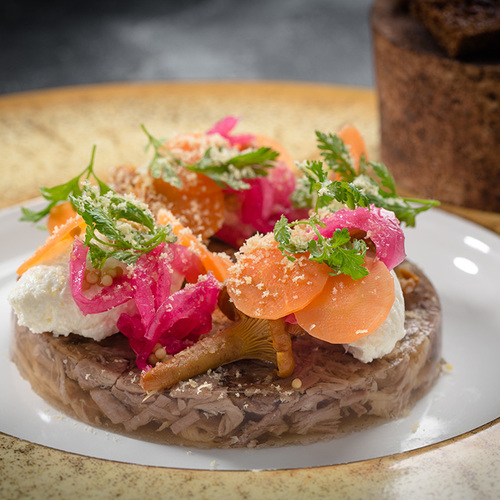 “The bed and breakfast of Moscow’s gastronomy ”

Claim to fame: The bed and breakfast of Moscow’s gastronomy

Reason to go: To check how the historical bar Americain is doing when everything American is behind bars

To look out for: Baked cabbage consommé with sturgeon and cod liver

A true tribute to constancy: the beautiful Art Nouveau room now occupied by Savva has been an eatery for over a century. It was an American bar, the very first in town, a canteen for the Soviet parliament, a distribution point for food rations, the Intourist restaurant, and, finally a fine dining establishment. The interior has stayed the same throughout; same pillars and moldings, same marble and huge windows, everything looks exactly like in 1905, when Metropol Hotel and its restaurant opened.

The gastronomic concept of the current incarnation, however, doesn’t really rest on the same foundation. While Chef Andrey Shmakov is more than familiar with classic Russian cuisine, he chooses to interpret it in a most innovative way. For instance, he prefers to serve tartare with champagne (yes, everything goes well with bubbles here!), to that end, he convinced the hotel’s pâtissier to make savory éclairs filled with jewel-glistening, chopped beef from the South of Russia, glazed with whipped butter cream, seasoned with fried onions and dill powder. Voilà!

The famous dressed herring, that dancing queen of every Soviet party, including the Communist one, gets a rethink too. Shmakov’s “seledka pod shuboi” (literary “herring in a fur coat”) looks more like a smørrebrød than a salad. A round of rye toast is topped with herring and garnish, then covered with a circle of beet, thin and pliable like jelly; the chef-d’œuvre is finished with mayonnaise snow. There is no Soviet legacy without mayo. But Shmakov doesn’t just stop there with the herring, another menu-highlight (part of the Russian tasting menu, together with kvass-glazed eel and pike dumplings) is the rare Caspian sprat from Astrakhan, served with herring roe and duck forshmak, or vorschmack if you prefer, which is traditionally made with veal. Need to wash this down with something?  Ask for a shot of polugar, a pre-vodka distillate reinvented after years of oblivion, or go for the chef’s own khrenovukha, a horseradish infused thing that will grow hair on your chest.

A choice of soups (you are not allowed to skip soup while in Russia) includes a crossbreed of shchi––baked cabbage consommé with sturgeon and cod liver, and ukha––a vichyssoise variation utilizing fried potatoes, with a whole Faroese langoustine in lieu of the ordinary shrimp.

Despite his Russian name and his thoroughly academic knowledge of Russian cuisine, Andrey Shmakov is actually a foreigner, he’s from Tallinn and divides his time between the two cities. There’s no paradox here though, Russian and Soviet culture is actually better preserved in the countries that used to be Soviet republics, it’s more well regarded than in Russia itself; this gastronomic nostalgia is probably the last connection to a common motherland that has otherwise been sold for scrap.