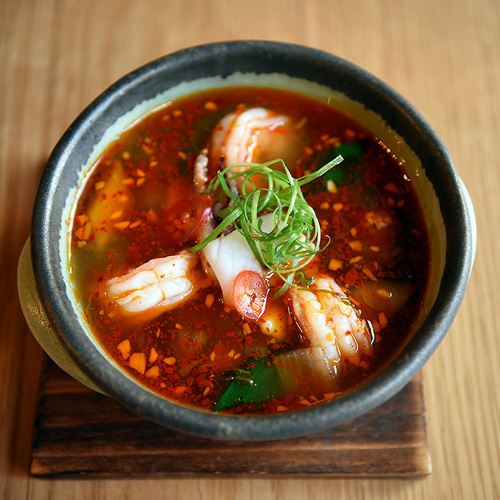 Reason to go: Intellectual yet informal dining, made for an unpretentious date night

To look out for: Try to book the intimate back-nook table, it’s less hectic in that corner

It could have gone terribly wrong and landed squarely in the contrived-experimental section of your local hipster food fair, kind of like the incongruous ramen burger that had its moment a few years back. As it turns out, blending Korean- and French cuisines is fantastique, a fine idea belonging to Soogil Lim. The South Korea-born restaurateur was knee-deep in academia, heading for a degree in biology when he abruptly traded his lab coat for an apron at the Culinary Institute of America, and subsequently landed a job at tony Uptown institution Daniel where blue haired ladies like to lunch on French froufrou. (To be fair, Daniel Boulud is a legendary New York toque whose precise cooking is far better than the staid interiors of his flagship restaurant.)  Lim spent seven years honing his skills at Daniel and another four as executive chef at Korean eatery Hanjan before stepping out on his own. Soogil is his sparse yet welcoming East Village dining room, a convivial space with floor-to-ceiling windows, communal tables and acoustics that’ll muffle your gossipy conversations.

French techniques, Korean ingredients, and plenty of astute experimentation, Chef Lim’s menu reads like a textbook example of crossover cooking, it teeters on the edge of obvious yet surprises with subtlety and finesse. Spicy soft tofu is a dressed-up take on soondubu jjigae, or Korean tofu stew; the bean curd a chic flan, accessorized with manila clams, shrimp and squid in a demure seafood broth that is spiced up just enough to not seem vulgar. There’s foie gras on the menu, bien sûr, straight from the Hudson Valley, presented as a terrine with brioche, fig and a jaunty green plum gelée, there’s also a magnificently lettuce-wrapped monkfisk, cooked to perfection, decked out with a colorful lobster sauce and stir-fried vegetables. Sweet potato beignets are three little elegantly grease-devoid orbs served with an ethereal, cold white kimchi soup, and the aster tofu salad is a terrific tangle of cooked aster flowers, yu choy, organic tofu and assertive soybean paste. Soogil offers two desserts, a fashion-forward passion fruit tart with basil infused champagne mango, and a playful Jenga tower of seven grain- and green tea batons with honey chestnut gelato. The beverages are limited to soju-based cocktails, wine, beer, makgeolli and sake as Soogil is still waiting on its liquor license.

Did Soogil Lim give a nod to former employer Daniel Boulud and his restaurant Daniel when he christened his own place Soogil, or was that just a coincidence? We don’t know, but we like being on a first-name basis with Soogil.