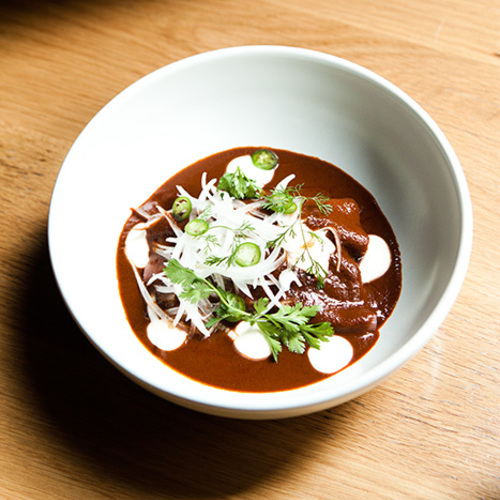 Reason to go: The artful tortillas know no equal in this city.

To look out for: Beware the hard upsell and the awkward tables that make tête-à-tête conversations virtually impossible.

Enrique Olvera did his homework before opening Cosme, the lauded chef of Mexico City’s grand slam, Pujol, studied, took notes, ate and drank his way through New York in order to really grasp what makes this city’s gastronauts tick. Then he gifted us with a swank restaurant where people gather not only for celebratory feasting but also for that favorite New York pursuit, counter dining and cocktail slinging. The generous bar is a voluptuous pleasure quarter, the dining room is sleek affair, lined with bookshelves casually decorated with coffee table books à la mi-casa-es-su-casa. Then there’s the food…

First of all, let’s talk about the tortillas. Olvera studied at the Culinary Institute of America, aside from being a true food-innovator he is Mexican, as such he knows that tortillas are the backbone of Mexican cuisine. At Cosme he makes them on a Celorio, aka “The Lamborghini of tortilla machines”, with old strains of corn grown in Mexico. Their subtle flavor is fragrant, slightly sweet and earthy, the texture is dense, chewy yet perfectly pliable, they make a fine vehicle for most everything on the menu, notably the bright cobia al pastor, an ingenious take on the breathy pork and pineapple pastor. Here the slightly oily fish is dressed with pasilla and guajillo, the pineapple is pureed and punched up with dried ground chiles. Olvera infuses his dishes with avant-garde maneuvers and savvy exoticism; smoked elderberries and yuzu elevate a tuna tostada, zesty lime kosho and delicate razor clams counterbalance a heady huarache, pleasantly nutty spelt berries and luscious Castelrosso cheese take his esquites to varsity level while a soft shell crab with yellow mole swings the ball straight into Thai territory with its green papaya salad and coconut milk softness. Olvera plays a sly back-hand, he’s reticently put the oh-so common guacamole in an invisible spot at the bottom of the menu, the Mexican restaurant staple just barely qualified for this chef’s culinary game. It’s the least remarkable thing here, yet when served with crisp fried triangles of said tortilla, it still scores some points.