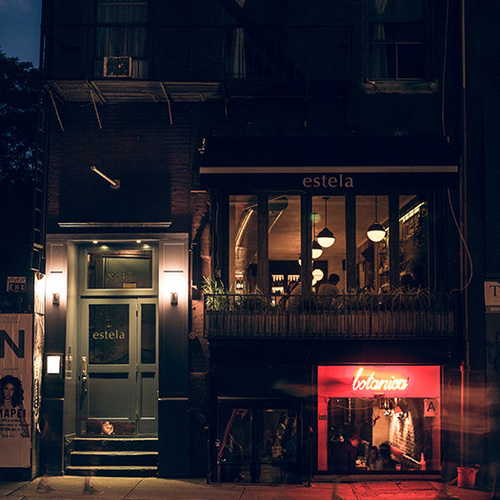 Claim to fame: That time Barack Obama stopped in for dinner with his family.

To look out for: Toast with lardo and jam.

Unassuming on every level, tucked away on a forlorn stretch of Houston Street that God and gentrification clearly forgot, three-year old Estela doesn’t make much noise. Estela is that quiet kid in the back of the classroom who knows all the answers but doesn’t shout them out. Estela is the brainchild of Uruguayan chef Ignacio Matto who had a brief run at short-lived Isa where the experimental high jinks were lauded by critics and dissed by everyone else. Having learned a few tricks in that kitchen, Matto now exhibits a dialed down, more refined version of those shenanigans. Rest assured, it’s still boundary pushing.

The Mediterranean-streaked menu is deceptively simple, made up of “small plates to share”, as our affable waitress so quaintly put it. That’s if you can read the menu in the Sin City-dim dining room. You’d do good to bring a headlamp to this establishment, not only to read the bill of fare but also to actually see the splendors you’re eating. The faint candlelight does no justice to Matto’s originality. He presents his subtle, understated creations with an almost premeditated irony (audacity?), on plain white china. Four thick-cut lamb ribs stand nakedly at attention, their intense meatiness is pleasantly mature, veering to cocksure mutton. A theatrically minimalist pile of endive leaves is dressed in orange-scented daintiness, it rests on a bed of smoky-toasted walnuts, funky anchovy and sharp-shooting pecorino and ubriaco rosso, an inventive deconstruction of the ubiquitous caesar salad. Beef tartar with sunchoke is unceremoniously set forth sans garnish, a closer inspection (Thank you, iPhone) reveals a glistening tableau of perfectly cubed NY strip and beef heart, dotted with fried flecks of the earthy root vegetable, it kisses you goodbye with a well-balanced kick of Latin American heat. And to really drive home the point: arroz negro with crisp fried squid and romesco, a black dish in a black room. Like most of Matto’s food, it’s a three-dimensional experience of layered flavors, textures and depth, an umami fandango that finishes with a lick of kokumi. That silent child in the back of the classroom is a creative genius when he opens his mouth.

Estela’s wine director and co-owner, Thomas Carter comes from Blue Hill at Stone Barns, his thoughtful selection of natural wines also features a few sherries and some next-level cocktails such as the mezcal Negroni. Carter and Matto’s unfussy dining room does nothing to swallow the din of its loud guests, it’s best to just let the food do the talking.