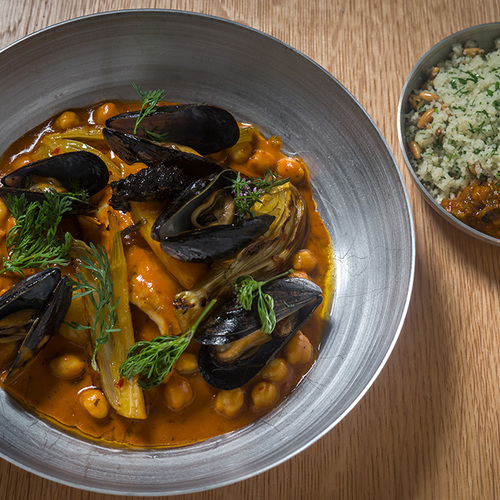 Embracing diversity, one spice at a time

Claim to fame: Chef Meir Adoni is a household name in Israel

To look out for: If you want a prime-time resy you’ll have to book way in advance

If only more people were like Chef Meir Adoni the Middle East might not be so conflict-ridden. His approach to cooking is refreshingly borderless. Israeli-born to Moroccan parents, Adoni interprets traditional dishes from the far reaches of this region, borrowing from one and giving to the other, embracing diversity, relishing all cultures and retracing frontiers in a most delectably creative way by journeying through Yemen, Syria, Palestine, Libya, and of course, Israel and Morocco. The fact that his restaurant is constantly packed would indicate that there are loads of people who are equally open-minded––people who really know how to raise the roof in this low-ceilinged, sparse shoebox of a dining room; yes, it does get loud here, it’s boisterous à la Tel Aviv where dinner outings invariably spill into improv dance parties. In fact, the best seats in the house are probably at the less acoustically-challenged bar.

Adoni’s business partner is Gadi Peleg, co-owner of convivial Breads Bakery a few blocks south, so get ready for some carb-loading. The challah, glazed with honey and garlic, accompanied by cured onion and crème fraiche weighs in somewhere between a breakfast pastry and a fancy version of the pedestrian potato roll. Get it! Order the Jerusalem bagel too, a sesame freckled UFO, dense and slightly crusty, served with za’atar and hummus-ish messbaha, in a “newspaper”-lined basket. It’s actually also a splendid vehicle for the smoked eggplant carpaccio, so called more for its presentation than its preparation, a thin slick of feta-spiked, baba ganoush-y goodness, smeared all the way to the edges of a round plate, with a supreme textural contrast of pistachios and a dreamy whiff of rose water.

When the waitress tells you her favorite thing on the menu is the lamb kebab, believe her. Complex, cumin-scented lamb, stuffed in pita-boats, with cocky mango pickle and a bright salad of radishes. The pita is slightly sweet, the lamb is punched up with rich fattiness. Well-balanced, albeit verging on too salty, it’s the type of dish you’ll be dreaming of revisiting. Smoked paprika-seared tuna is a Moorish mosaic with dollops of Jerusalem artichoke cream, coriander oil and chipotle mayo, the dish is lifted further with dainty sprigs of fennel blossom. Similarly, the beef tartar is a visually compelling collage with sheep’s yoghurt, smoked eggplant, raw tahini and a sprinkling of pea tendrils. Sometimes Adoni goes a bit overboard, as if he was a bit too anxious to please, his dishes are piled with ingredients that, while perfectly delicious together, might actually benefit from a bit of less-is-more-attitude.

Naturally the wine list is comprised of Mediterranean gems, some more common than others, from well-known Château Musar to rather obscure Israeli labels.