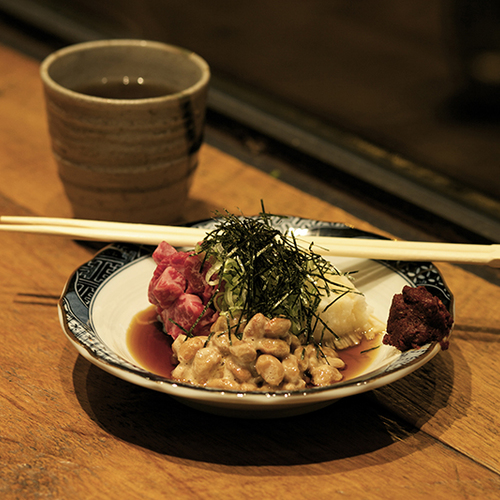 “Where offal gets the star treatment”

Claim to fame: Where offal gets the star treatment

Reason to go: Get acquainted with more innards than a gastroenterologist sees in a day

To look out for: The earthy, juicy Asian-Cajun andouillette, a Washuguy beef sausage, stuffed in large intestine

It takes guts to serve guts. The aversion to entrails is real, not everyone appreciates the funky flavors of organ meat, yet on a quiet stretch of the West Village there is a swashbuckling restaurateur who has made offal his trademark. Takashi Inoue serves horumonyaki, or grilled guts, he also serves dazzling horumon-based dishes. His beef-centric menu is an anatomical study of the cow’s viscera, with a few familiar cuts like ribeye tossed in for those less adventurous eaters.

Yakiniku is a Japanese adaptation of Korean BBQ, a cooking method that Inoue learned from his Korean-born grandmother, an Osaka restauratrix who also taught him how to make the traditional chili-raging marinade that is the backbone of Takashi’s grilled dishes. Inoue brushes it on everything from kalbi to cheeks and stomach. It’s like a bite of Picasso’s Guernica; a masterpiece of painfully fiery barbs and artfully rounded expressions. And just like Picasso probably never divulged how he mixed his pigments, Inoue won’t disclose what’s in his grandma’s secret sauce.

Horumon might sound like Pokemon’s rotund cousin, it sounds fantastic when it lands on the table grill, it spits and sizzles before it swells in the heat. Sure you can go for the standards like short ribs but you’re going to want to try the tongue-trio that comes with a lick of citrus-zippy ponzu mixed with grandma’s mysteries. Liver, heart and sweetbreads are equally complex; dominos of assorted stomachs require you to ruminate, the fourth belly is the best rubber toy we ever ate.

It’s Inoue’s inventive specials, however, that really steal the show. The calf’s brain cream is surrealism on a plate; it comes in a tube, it’s mild and vaguely smoky. Spritz it on a baby blini and top it with a blob of Osetra caviar that adds a smack of umami and brininess. Then go for the “testicargot”, yup, that’s cow balls escargot style, bathing in shiso-bright garlic butter. Don’t miss the squid ink rice with miso-marinated sweetbreads, it’s the Edgar Allan Poe of food; a black-tinted moan of a rice dish with spice-riled sweetbreads, heated over the embers on a magnolia leaf, and served with a crow’s cry of yuzu aioli. Divine and poetic.

The warmly lit space with whimsical wall paintings has a convivial izakaya-vibe, it’s a tight squeeze with 34 seats. Reservations are only taken for groups of four or more, smaller parties line up outside before the place opens. Beverages range from excellent sakes to eccentric beers and passable wines. The sole dessert is a soft-serve soother of Madagascar vanilla-infused ice cream.