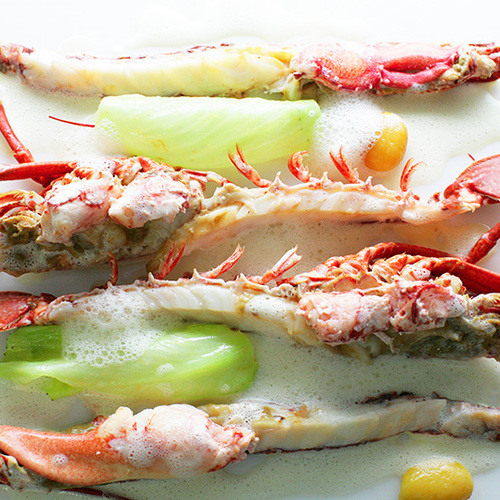 “Letting the greens dictate how they want to be cooked”

The vegetable wizard of Paris

Claim to fame: Letting the greens dictate how they want to be cooked

Reason to go: Nobody can pair onions with strawberries like Passard.

Look out for: You’ll need deep pockets to dine here

Alain Passard is a vegetable whisperer. Sure, call us crazy, and Passard too for that matter, but you’ll get it once you try his food. The chef claims his produce talks to him, so he spends every morning listening to the fresh sounds that come in from his vast gardens, discovering how his produce will work together to create sensational flavors on that specific day. Then, incongruously enough for a fine dining establishment, he goes about cooking them without recipes. Storytelling aside, Passard does have a set of iconic, recurring dishes that have been around for years, and that the kitchen executes perfectly, time and again. The beauty, and indeed the beast, of Arpège is that no two plates are ever exactly the same, no two guests receive the same dish, and no two tables the same bill. Arpège is essentially Alain Passard’s private, yet very open-to-all dining room, with an ever-changing menu.

Chef Passard is a legend, he’s living proof that truly great cooking is deeply personal, slightly improvised and always an emotional rollercoaster. His world’s a stage, and all the guests and all the staff merely players. His tables are decorated not with flowers, but with seasonal vegetables. His dining room is dotted with René Lalique glass, there is wood paneling, soft wall-to-wall carpeting, and classic revolving doors to the kitchen. There is no music, yet there is always a musical atmosphere.

To an older generation of diners, Passard is famous for grilling meats to perfection; that was when Arpège was a rotisserie. However, it’s his vegetable wizardry at the opposite side of the gastronomic spectrum that has truly put him in the global limelight these past ten years. It’s a meatless endeavor that he’s still exploring, while also blurring the lines between sweet and savory, making the meal somewhat more circular than linear. Cauliflower baked into a brioche, carpaccio of radishes, strawberry salad, his inventions aren’t garish, they’re tiny gestures with subtly veiled agendas.

Passard recently introduced the La volaille haute couture mi-poulet mi-canard. Half duck, half chicken: an elegantly fused hybrid, hiding under a layer of salt, a nod to his famous salt baked root vegetables. This Frankenstein creation reveals the shadow of each bird, in each bite. Or perhaps it’s a completely new animal, reminiscent of veal. Don’t try this at home, kids.

Arpège’s savvy regulars come for the long veggie-tasting menu and know to share the extravagant à la carte animal dishes. This is where Passard shows off his talent for grilling whole beasts, whether it’s large turbot or blue Chausey lobster. He took over the restaurant in 1986 and has influenced fellow chefs and surprised diners ever since, we doubt he’ll stop any time soon.