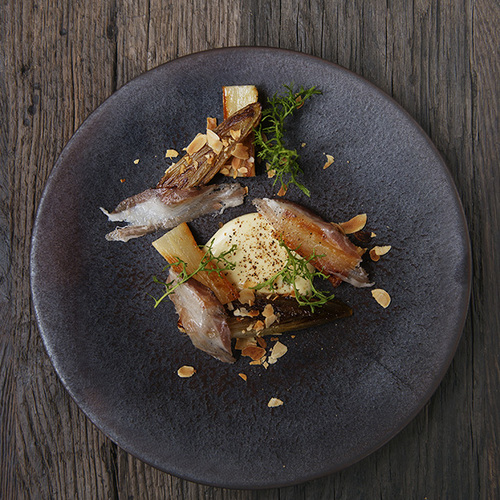 Claim to fame: Making a gastro-destination of the 11ème arrondissement

Look out for: That guest at the table next to yours is definitely famous

Bertrand Grébaut was one of the first to revive the restaurant scene in the du jour-hipsterized 11ème arrondissement where he’s built a small dining empire. It started seven years ago with the ultra-cool, casual bistro Septime, spilled next door to the successful and very creative seafood bar Clamato, and spun around the corner to the natural wine bar Septime La Cave. Scoring a table at Septime is still roughly as easy as climbing the Eiffel Tower, savvy, international foodie-jet setters know to book some three months in advance. No wonder the menu keeps evolving! The 6-course dinner (€70) is consistently bursting with ideas and surprising flavors, as is the redacted 3-course lunch (€32).

The buzzy atmosphere is palpable in this concrete room with wooden tables and chairs, if these walls could talk we’d hear fabulous tales about the diverse cast of regulars such as Beyoncé and former Prime Minister Manuel Valls, yet despite the hype Septime exudes a relaxed, effortlessly cool vibe that very few restaurants manage to uphold year after year. The food never features the usual trappings of conventional luxury ingredients, instead chef Grébaut and his team elevate vegetables to icon status, a philosophy he surely adopted from his mentor Alain Passard, during his formative sous-chef-years at L’arpège. There are bold, generous and lively gastronomic statements here, the flavors are manifold, though instantly recognizable as perfectly French and exquisitely fresh.

A heap of just-picked herbs and leaves reveal sensationally soft and pungent roasted Jerusalem artichokes, dressed in salty hazelnut praliné dressing. The same ingenious dressing also primps a dish of grilled radicchio stems, paired with thin shavings of bottarga and even thinner slices of sweet citron. Dishes evolve and revolve, details disappear only to return further into the meal; it is the genius work of a spontaneous and open-minded kitchen crew that is always one step ahead of the game. Shellfish are often sashimi-raw or steamed, i.e. uncooked, sliced scallops with delicate slivers of fermented daikon, sea urchin and a roasted pumpkin sauce, or sea bass ceviche splashed in Fuji apple juice and lovage oil that release a bouquet of gentle and simultaneously radical aromas. Carbs are scarce on this menu, herbs and greens are served in abundance, meat is frequently of the winged, feathered type; roasted poulette, or young chick, for instance, with aromatics carefully stuffed under its skin, a classic technique called contiser that is normally utilized in more lavish restaurants.

Septime has always championed natural wines, its selection leans toward the artisanal and traditional, rather than the crazy, sensationalist stuff that so many other bars tend to advocate. The restaurant’s cocktails, aperitifs and digé-dittos are well crafted and of the rare, handmade, small-batch type.