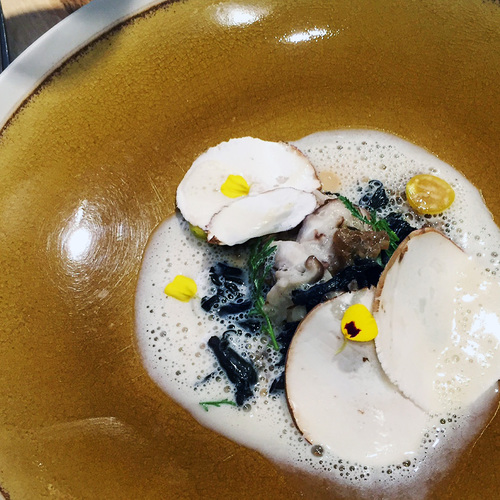 A marriage of French and Chinese sensibilities

Reason to go: The charm and spontaneity of a daily changing menu

To look out for: Creative bao buns that bridge East and West

All you really need is love. Ask Adeline Grattard, she knows. The chef who once worked alongside Pascal Barbot at the legendary l’Astrance traded the formalities of Paris for a spell in a Hong Kong kitchen where met the love of her life, Chi Wa Chan, a tea expert. She convinced him to move back to the French capital where they established a teashop with a semi-secret dining room that quickly became the talk of the town. Boutique yam’Tcha’s success prompted the couple to open a larger restaurant, a kettle’s throw away, on tony rue Saint-Honoré, allowing them to focus on perfecting tea and re-imagined bao buns at the old spot while pouring their wilder gastronomic gusto into the new premises.

Grattard’s sensibilities and innovative ways have reached new levels of confidence in this larger kitchen. The basic philosophy is concentrated around a franco-chinoise, creative cuisine du marché, inspired by what can be found at the ever changing farmers market, seasoned with strong Chinese influences. Fusion or confusion? All depends on the chef, not the format itself. Grattard has chosen to let go of the typical French cooking restrictions while still exhibiting devilishly sharp classic skills and utilizing excellent fresh produce. In her case it’s masterful fusion and nothing else.

A discreet intermezzo of mushrooms sounds something like this: flash-woked black trumpets and sliced, raw white mushrooms are placed on a sauce vin jaune with clean, raw pieces of monkfish liver, bitter marigold leaves and tiny slivers of kumquat. The contrasts are dramatic yet harmonious, with a refrain of sweet, sour and umami, it’s bold and delectable. A more bombastic cantata of blue Breton lobster can almost be heard back in Hong Kong where the dish actually gets its rhythm; the crustacean is randomly cut and spread democratically across your party’s plates, it’s scattered with gently cooked strips of sweet Cévennes onion that dance between the smallest, most softly crunchy pattypan squashes, all encompassed by a sticky, punchy and addictive ginger sauce, based on a very special artisanal XO that Grattard smuggles back by the barrel when visiting Hong Kong. Her compositions always end with a signature bao bun, sometimes filled with Stilton and Amarena cherries, occasionally with luscious bitter chocolate.

Although the wine list is large and filled with mature treasures, it’s the tea pairing that really makes this food sing. Chi Wa Chan’s selection is curious, well-researched and refined to the point of making alcohol superfluous.