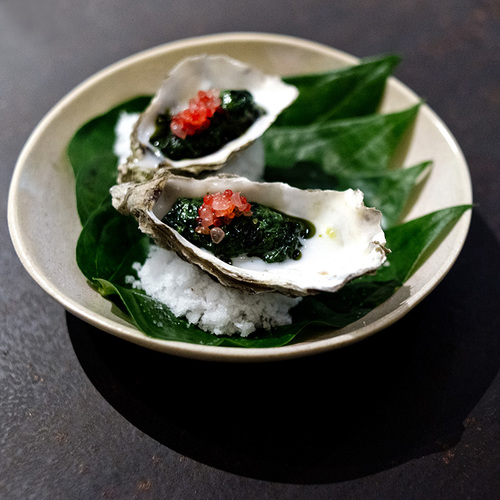 Reason to go: If only to get to know the city’s most hospitable couple, Rishi Naleendra and his wife Manuela Toniolo

To look out for: The city’s most unique bread service, the molasses glazed stout and licorice bread, that blurs the line between bread and cake

Cloudstreet heralds the coming of age of Sri Lanka-born and Australia-trained Chef Rishi Naleendra. Not content with dishing out the city’s best value-for-money tasting menu, the former Cheek by Jowl chef revamped his modern Australian eatery, now a bistro called Cheek, and, months later, went on to cut the ribbon to his new fine-dining flagship in the same Amoy Street neighborhood.

Flanked by his wife Manuela Toniolo, General Manager Gareth Burnett and Sommelier Vinodhan Veloo, Naleendra works the open-concept kitchen like a consummate pro, doling out a parade of artfully arranged courses from his modern Australian arsenal while subtly painting the backdrop about his Sri Lankan heritage. Sawagani (Japanese freshwater crabs) are barbequed and served on millet cooked in coconut milk-enriched Sri Lankan yellow curry, washed down with a hearty cup of lemongrass-scented coconut milk broth rich with aromatics and spices. Lamb saddle is grilled over hot coals and served rare alongside a quenelle of spring onion sambal, a smidgen of mint, coconut and green chili puree and, last but not least, a riveting nugget of charred radicchio wrapped with Sri Lankan young jackfruit (polos) curry. This subtle Sri Lankan touch is even evident in the parade of opening snacks, notably a serving of grilled Australian oyster wrapped in a sheaf of betel leaf, usually offered as a mark of respect in chef’s motherland, topped with finger lime and fresh pressed coconut milk. Throughout the duration of the meal, the Sri Lankan gestures are intermittent and low-key, deftly built into a tasting menu headlined by the city’s most unique bread service––a loaf of Singapore stout and licorice bread glazed wih molasses.

Set in an unusually spacious shop house space on Amoy Street, Cloudstreet’s eclectic design will win you over from the get-go, be it its recycled metal-fitted 14-seat counter, the gigantic aged mirror flanked on both sides by a pair of vertical gardens or the fabric-draped chandelier that drops down from a glass-topped airwell. The 350 label-strong wine list by Veloo is designed like a magazine and features mostly old world bottles augmented by a clutch of stellar minimum intervention wines. If wines are not down your alley, consider Veloo’s riveting repertoire of non-alcoholic beverages (blood orange with burrata whey and basil oil, tomato water with spiced grapefruit). Service led by Burnett is engaging and heartfelt, exactly how you’d feel when you visit a friend’s home.