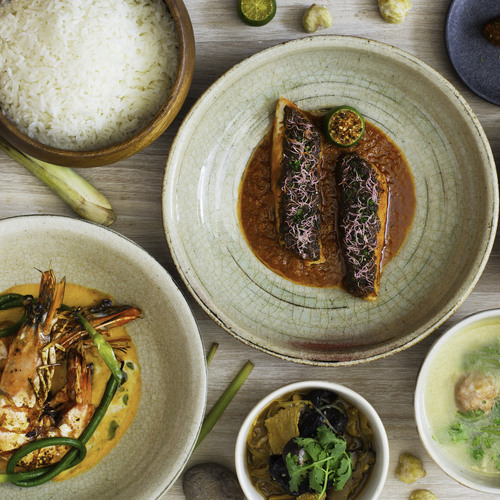 “A discovery of modern Peranakan creations via the "ahmakase" menu, created by one of the city's youngest Peranakan chefs”

Reason to go: a discovery of modern Peranakan creations via the “ahmakase” menu, created by one of the city’s youngest Peranakan chefs

Of course there are multiple Peranakan restaurants in Singapore, but no one does Straits Chinese like the chef-owner of Candlenut, Malcolm Lee, a university graduate who eschewed cushy white-collar jobs in favor of a career in the kitchen, putting Singapore’s heritage cuisine on the avant-culinary map.

Like many before him, the young Baba (Peranakan man) approaches Straits Chinese cuisine with utmost respect, he’s got one foot firmly planted in the Peranakan tradition he grew up with, yet unlike his peers, Lee’s other foot is adventuring in new directions. With mortar and pestle in tow, he takes the cuisine boldly into unchartered territory, while constantly looking back to make sure his mom and grandmother approve of these explorations. Playing with classic Straits Chinese ingredients like assam (Tamarind), petai (Bitter bean) and buah keluak (Indonesian black nut) and the 10 different types of rempah (Spice paste) he has in stock, Lee experiments gently but relentlessly. Instead of serving buah keluak classically, with chicken, the black nut appears in various guises; as a thick paste coating hunks of beef short ribs or prawns, in a earthy consommé with beef cheek, as well as mixed with sambal (Chili paste made with shrimp paste, fish sauce, garlic, ginger and shallots), it even appears in a dollop of ice cream. Instead of serving bitter beans straight up with sambal and prawns, he pairs them with assam, sambal and wok-fried squid for an unusual sweet, mildly zesty combo that is perfectly complemented by a bowl of Thai rice. Lee excels at stretching the boundaries, but he navigates the classics just as swiftly, a taste of his chunky pork or chicken satay glazed with kicap manis or his dessert of kueh salat (two-tiered cake with butterfly pea-colored glutinous rice and pandan-flavoured coconut milk) will prove just that.

Candlenut recently moved into a lofty, bigger – and grander – space on Dempsey Road. Its wine list is basic, consisting of wines that pair well with spice-heavy Peranakan food.