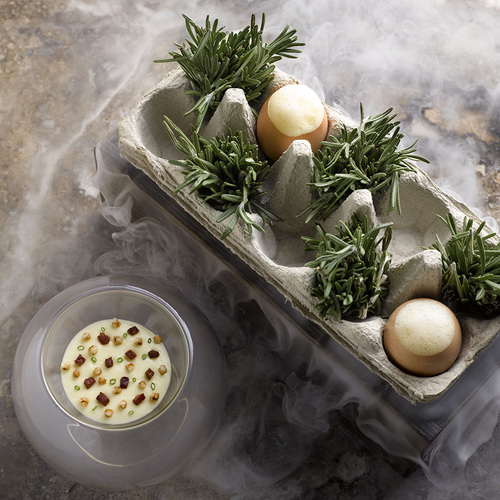 Reason to go: Rediscovering French cuisine and falling in love with it all over again

To look out for: The whimsical art installations hanging from the ceiling in this lofty space

Refreshingly pretense-free, restaurateur Julien Royer worships in the house of Less-is-More, with seasonal, artisanal ingredients and a soupcon of elegance. His establishment is named after his grandmother Odette, a woman who taught him the fundamentals of cooking and instilled in him a love for hospitality and thoughtfully prepared food.

The near-impossibility of securing a resy would indicate that diners have discovered how this Michel Bras alum is making French cuisine sexy again. Not in an old-school way with heavy sauce-bombast, but in an uncluttered style, with a singular focus on pristine produce from Europe and Japan. Royer’s squab, sourced from Breton farmer Fabien Deneour of Plounéour-Ménez, appears as a double act; breast sous-vide, roasted then barbequed, slender leg confit in duck fat, the whole fandango theatrically served tableside, drizzled lightly with an intensely profound squab jus. His Scottish blue lobster arrives with a whiff of Mediterranean je ne sais quoi, a bisque dressed in a decidedly contemporary tone with cherry tomatoes, fennel confit and accents of lemon purée. At times, Royer surprises with “masculine” dishes like the springy lobes of perfectly executed Limousin veal sweetbreads paired with Jerusalem artichoke, chestnut, parsnip and mustard leaves in veal jus. Odette’s autumn menu features, among other standouts, a heart-warming bowl of Ardèche chestnut velouté with a hint of burnt butter and a blanket of white truffle shavings, recipe courtesy of Royer’s mother. With stellar ingredients, a minimalist approach to sauce, and consistently strong kitchen execution, Royer has elevated Odette to one of the city’s most well loved contemporary French restaurants.

Set in the beautifully restored National Gallery, which once served as the country’s City Hall and Supreme Court, the restaurant boasts an airy space with a soaring ceiling, festooned with food-inspired aerial art installations. A floor-to-ceiling picture window frames the brightly lit kitchen, offering diners a panorama of the cooking action. The wine list is predominantly French with a clutch of New World, rare labels, single bottle collections and an extensive selection of biodynamic wines.