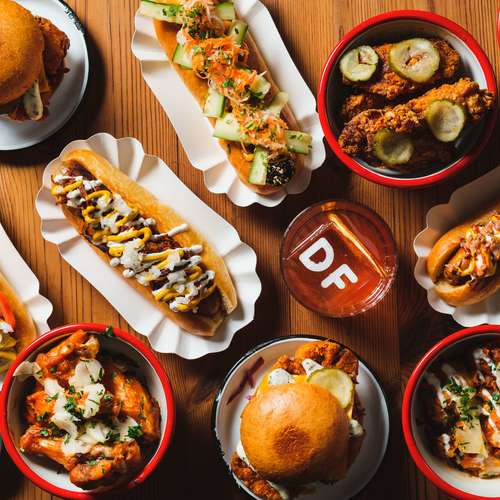 “A power hitter in the handcrafted sausage game.”

The best of the wurst

Claim to fame: A power hitter in the handcrafted sausage game.

Reason to go: Hot dogs the size of a baseball batter’s biceps.

To look out for: Milkshakes spiked with super premium Swedish booze.

Swedes might not care to admit it, but hot dog joints have definitely formed part of the Swedish culinary culture. For decades, franks ruled, they were the only street food available and could be had at iconic kiosks across the country, kiosks that also functioned as open-air rec rooms for local, loitering teenagers. Every citizen knew the short menu by heart and held its delicacies more dear than meatballs; skinny, grilled or boiled sausages wedged in spongy buns, topped with various condiments. For those who really wanted to go all-out there was (and still is!) the Saab Turbo of street-eats, the “tunnbrödsrulle”, a burrito-esque treat of two hot dogs, mashed potatoes and incongruous, so-called shrimp salad, completely devoid of seafood, wrapped in flatbread.

The “korvmoj”, aka hot dog stand, is an institution, to this day. Here in Stockholm, however, there’s a new player giving the old classic “tube steak” joint a run for its money. Dogfood is an American style, locavore-dream, serving handcrafted showboats, made with organic beef, pork and chicken from handpicked producers, by award-winning, local wiener maker, Korvhantverk. A Koenigsegg in a casing, embraced by a bun from one of Sweden’s best bakers, crowned with house-made condiments.

The chorizo dog, “Locals Only”, with cucumber mayo, mustard and ketchup, topped with a pile of fried onions, is a spicy, juicy, umami-packed experience, and the Chicago-inspired “Ballpark” is a homerun of pork with cucumber relish, pickled pepperoncini, tomato, onion, mustard and celery salt. Vegetarians have adopted the “Puppy Dog”, a fiery sweet potato dog rolled in sesame seeds with chili mayo, pickled carrots and daikon, and embraced the deep fried, organic buttermilk-marinated cauliflower dusted with chili, served like a burger, in a brioche, with a side of coleslaw, pickles and dressing.

All of this can be washed down with a succinct selection of hip tipples; natural wines from Arianna Occhipinti, orange dittos from Calcarius, a choice of local, micro brewed beer, cider from Brännland Cider and booze-free Pop Art Craft Soda, both from Umeå in the north.  Cocktails are created with the same philosophy; the list is short but sharp; Negronis with gin from Stockholms Bränneri and vermouth from Spriteriet, Mackmyra whisky quaffs and various vodka creations. Then there’s the perfect dessert, a decidedly adult spiked milkshake, try the “Cold Fashioned” (cherry and whisky) or the Pucko (chocolate and whisky).