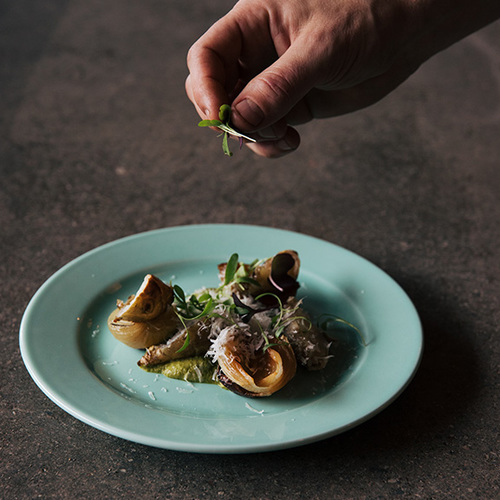 The cook, the brewer, the gardener & his wife

To look out for: 20 cl beer sips from the continuously changing 20 brews on tap, you might not ever want to leave

These days, the spacious warehouses in the port of Frihamnen are primarily occupied by auction houses, art galleries and hip film production companies, but as the surrounding areas are currently being transformed into modern, circular-minded residential blocks, a value-added bonus has come along: restaurants like Farm.

It started when entrepreneur, brewer and wine importer Niklas Jakobsson set out to relocate his Stockholm Brewing Co. outside the city center and merge it with a restaurant. He called his all-time favorite chef, Mauritz Stormgard Larsson, and things took off. Chef Stormgard Larsson, previously at iconic Stockholm restaurant Mistral, as well as Oaxen and 19 Glas, switched careers in the late 00s, becoming a biodynamic gardener by profession. Since 2013, he runs his own farm, Karshamra Mat & Trädgård together with his wife, Sommelier and Front of House Manager Agnes Stormgard Larsson, previously at tony restaurants Mathias Dahlgren and Esperanto.

The couple brings all vegetables, herbs, beef and lamb from Karshamra, making the restaurant partly self-sufficient. Further expanding on the sustainable theme, the whole operation––brewery, farm and restaurant––collaborates with various local companies to create a circular, no waste system. Mash from beer production is used in the inhouse bakery, it also feeds the animals and the compost that of course gets topped off with food scraps.

Farm’s constantly changing menu consists of dishes made in a straightforward, no-fuss fashion, lifting the unique, intense flavor of each ingredient. Start out with crispy veggies like radish with fresh goat cheese and olive oil, pickled bell pepper and romesco salad or flatbread with mangold, chili, garlic and ricotta. Vegetables and herbs play a major role even in meat and fish dishes. The veal tongue is slow-cooked in white wine, pan fried with butter to create a decisive crust, and served with steamed pointed cabbage, delicate shoots of red cabbage and a béarnaise sauce made with Mexican marigold. Slices of lamb heart are tossed in spicy tahini and paired with soft, juicy carrots, fresh parsley and lamb heart bouillon. Rabbit for two is presented on a large ceramic platter with leg confit, rosemary- and thyme overnight-marinated filet, as well as the miniature rabbit ribs to nibble on, it’s accompanied by deep fried black cabbage and oven roasted root vegetables, with aioli and parsley served on the side.

The warehouse-style dining room has very high ceiling, an open kitchen and bakery, a bar in the corner and a backdrop of large windows, displaying the adjacent brewery tanks and equipment. Stockholm Brewing Co. primarily makes low- and medium alcohol-content beers, usually very food-friendly and with plenty of personality. At Farm, however, there will always be a selection of unique, 750-ml-bottles available, as well as collaborations with likeminded international brewers. Watch out for Michael’s Sour at 7,7 percent, brewed with New Belgium Brewing Company in Colorado, and Stockholm Is Where the Tart is Sour at 8,4 percent, made with Portland, Oregon’s Cascade Brewing.