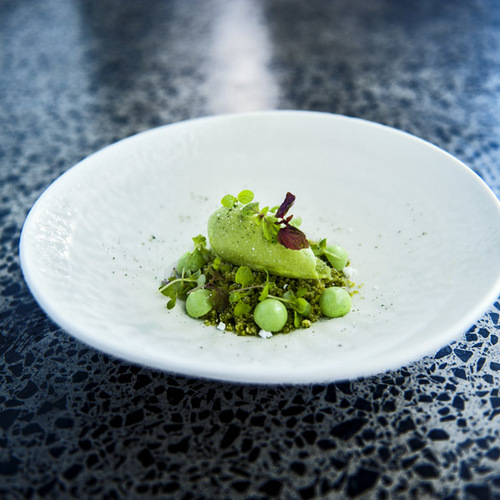 An Italian Cantata with a J-Pop Beat

To look out for: Exquisite, handmade pasta.

Pop-quiz: what’s the most popular cuisine in Japan after Japanese food? Top marks if you answered Italian. Poke your head behind the kitchen door in any leading restaurant in Italy itself and the chances are good that you’ll see at least one Japanese chef working the pans. All around the world now we’re seeing Italian restaurants opened by Japanese operators, subtly crafting a new version of the cucina vera that is typically lighter, and more seafood-oriented than back in the old country. But what of the Italian chefs who have made a study of Japanese cooking? They’re an altogether rarer breed.

It would be wrong to say that LuMi is Japanese eatery run by Italians. It’s fundamentally an Italian restaurant at heart, right down to the flavor of its conviviality and the mode of its service. But there’s Japanese in its DNA, and it gives the whole enterprise an intriguing twist. Take the house’s rendering of chawanmushi. In Japan it’s a steamed custard, the eggs seasoned with dashi, soy and mirin, and it frequently holds mushrooms, ginko and shrimp beneath its shining surface. At LuMi the dashi is still there, but it’s made with rosemary along with the kombu and bonito flakes, and while the custard itself is seasoned with soy (here a mixture of the white and usukuchi brews), the flavor of Parmigiano-Reggiano is the highlight. Best of all it bears the silken delicacy that distinguishes the best examples of the traditional Japanese dish.

Sansho pepper makes perfect sense with a “tartare” of ripe oxheart tomato laid over a smear of crème fraîche, while a butter incorporating umeboshi, Japan’s dried salty-sour stone fruit that is most often referred to as a plum but actually belongs to the apricot family, cuts the richness of a wonderfully fatty piece of kingfish.

Elsewhere on the menu the inspiration isn’t quite so elementary. There’s dashi again beneath perfect, tiny agnolotti, but their rye and porcini filling swings the compass as much to Copenhagen as it does Kyoto.

The orange zest that flecks scialatelli, a pasta resembling fettuccine, isn’t something you’d typically expect with your spaghetti or your noodles, while the eel and bottarga that the strands entwine could read Japanese as readily as they could be taken to be Italian.

Here’s the thing: it doesn’t really matter. Owner-chef Federico Zanellato brings Italian brio and Japanese care with detail to just about everything to which he turns his hand.

A word on the room: it’s not a drawing card in itself. That said, in late spring or early autumn, the glass box set on an inner-harbor bay amid wharf-top apartment blocks, has a certain airy charm. And between the hip, Italianate wine list (compiled by Zanellato’s sommelier wife, Michela), the conviction of the wait staff and the straight-up power of the cooking, LuMi carries the day.