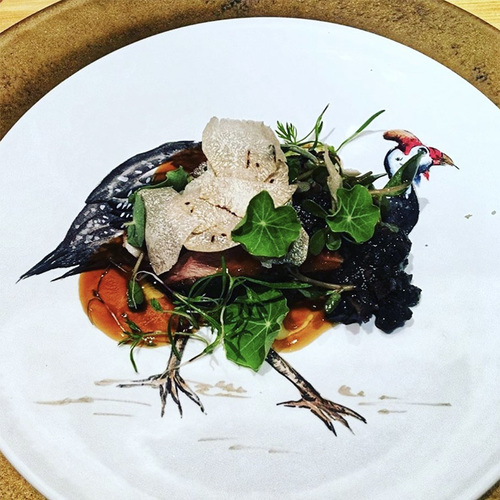 To look out for: Tokuyoshi does a stint behind the bar once a month

Few chefs have Yoji Tokuyoshi’s chutzpah. Finding himself broke in Italy 15 years ago, he showed up unannounced at Massimo Bottura’s doorstep looking for a job. When Bottura asked him what he could do, he simply replied, “Everything.” After nine years at Osteria Francescana, he broke out on his own, transforming a former sushi shop in Milan into a Michelin-starred gem serving contemporary Italian cuisine to initially skeptical Italians.

In February, his first Tokyo venture opened in the former location of Jimbocho Den, inside a refurbished Japanese home with eight counter seats. The menu features a couple of Ristorante Tokuyoshi’s cross-cultural signatures such as “gyotaku” sardine stuffed with wild fennel and scallop mousse, laid atop a squid-ink imprint of a fish head, alongside seasonal dishes like slow-roasted guinea fowl with stewed innards tossed in squid ink and sansho oil, and clay pot-cooked rice whipped with egg whites and golden yolks, garnished with marbled ribbons of wagyu salami and beef tongue slathered in salsa verde. It’s Tokuyoshi’s riff on tamago kake gohan (rice mixed with raw egg) made to channel risotto, and it’s ridiculously good. Gooey cacao pudding cake topped with yomogi herb ice cream is at turns comforting and ecstatic; a hug and a swoon at the same time. Each plate comes with a small cup of broth to complement the flavors: In a nod to pesce in saor, an intense soup of sweet onions and raisins spiked with vinegar balances the gyotaku dish. The food pairs with a well curated selection of natural wines, including some reasonable bottles like Tre Uva Malvira 2011.

The kitchen is helmed by Tokuyoshi’s ex-sous chef, Hidehito Hirayama, but the man himself flies in from Milan to cook once a month. Tokuyoshi says he intends to split his time between Italy and Japan (hence the name, Alter Ego). A crazy idea, but Tokuyoshi has an ingenious way of turning crazy ideas into gold.