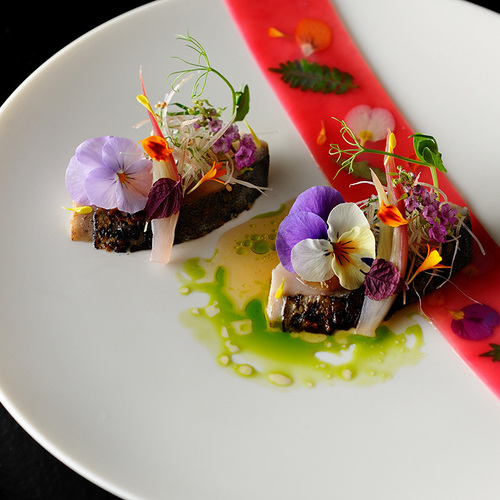 Reason to go: Serene dining in a Zen-like subterranean space

To look out for: Hoshinoya guests get priority booking

Noriyuki Hamada has always marched to the beat of his own drum. When he was a student, he confounded and then delighted his home economics teacher by presenting a dessert hidden inside a hollowed-out apple. Those creative, contrarian instincts helped him become a Bocuse d’Or medalist in 2013 and continue to inform his gutsy, French-inflected approach to kaiseki at Hoshinoya Tokyo.

Housed in the basement of the luxe Hoshinoya Tokyo ryokan––a sleek and sexy modern Japanese inn––the restaurant reflects Hamada’s obsession with Japanese culture and history (previously, he’d sported closely-cropped hair with a samurai-style top-knot). The hotel is built upon the site of a former feudal mansion, and the chef presents his first amuse bouche, a crispy filigree of pulverized fish bones, on a sculpted vessel fashioned from the mansion’s excavated wood and nails. Five dainty bites; sea bream tartare rolled up in nori and daikon, bonito “boudin” with apple puree, perch on white stones heated to different temperatures. Here, another nod to history: The Buddhist monks that invented kaiseki were said to keep warmed stones inside their clothes to stave off hunger.

No meat nor fowl will you find on the menu (fun fact: kaiseki was traditionally based on fish and vegetables). Hamada focuses on undervalued seafood––“fish that is rejected because it’s not the right size, or difficult to prepare,” he says. Before Tokyo, he worked in the mountains of Nagano Prefecture, where he foraged for wild ingredients. Dishes such as shark-skinned flounder, which comes with samphire and cabbage flecked with umami-laden shio-kombu (salted kelp), reflect his connection to nature. The food pairs with a nice selection of wines, mostly from Europe, with some vin naturel in the mix.

Though he masks them well behind his serious demeanor, Hamada hasn’t lost his playful tendencies. A bright-red apple “lid” conceals a meticulous miniature composition of crab, uni, ginger-like myoga, and apple. The dish is so beautiful and such a surprise, it makes you feel like it’s your birthday.