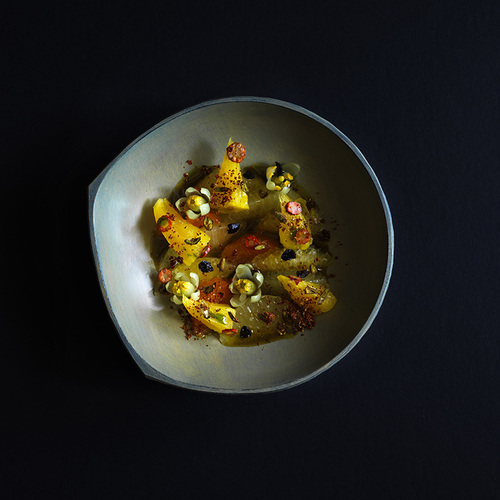 Pioneers of the new luxury

To look out for: Beware of sticker shock

Inua, the new venture led by Noma alum Thomas Frebel, makes its home in the unlikeliest of places––inside a nondescript office building that looks as though it was built during the economic bubble. This moment of cognitive dissonance is, perhaps, what makes walking into the restaurant so spectacular. After you enter through a side door, an elevator deposits you on the 9th floor, where the vast and airy interior is appointed in a chic Nordic-meets-Japan scheme (designed by Danish firm OEO Studio, lit by gigantic paper lanterns), with an open kitchen plan and sweeping city views. Frebel’s intention to defy expectations is clear from the outset.

And defy he does, with inventive dishes that celebrate the diverse realm of Japanese flora. There’s pineapple and dragon fruit from Okinawa, seaweed from Kyushu, and white asparagus from Hokkaido. He estimates that the menu is “60 percent vegan” and wants to push the envelope further. This is a bold idea––particularly in a country where salads often include some form of pork––but Frebel brings his A-game. Edamame in squid broth with rocket flowers is delectably moreish, the taut umami pierced by the shock of radish leaves reminiscent of lovage. A feathery cluster of maitake mushroom the size of a child’s brain is aged for five days, cold-smoked for three, and then simmered in a broth flavored with miso and pine leaves. It tastes like the earth’s very essence.

Exotic ingredients play a leading role: Finger bananas are sandwiched between ginger leaf and miso crisp, and clay pot rice is sprinkled with fried bee larva from Nagano. The impact of the bee larva, however, is diminished by the powerful aroma of rose petals. Octopus, cooked to perfection with just enough bounce and spring, is the runaway star, served atop a seductive “mole” sauce made from the rare kaya nut.

Given the hefty price tag (¥29,000 for the menu, wine pairing from ¥16,000), it may take time to convince locals that luxury goes beyond foie gras and wagyu. But if anyone can do it, it’s Frebel.