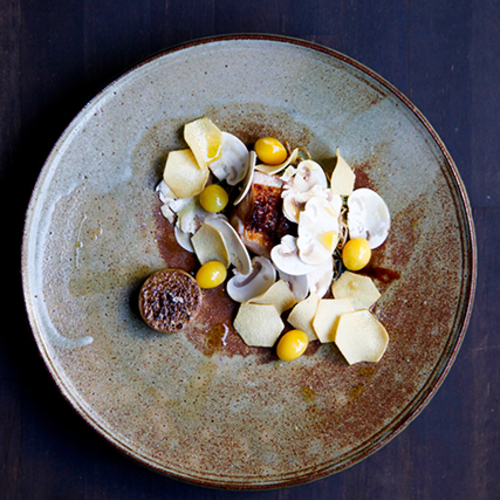 Reason to go: Some of the most exciting cooking we’ve encountered recently

To look out for: At ¥7,800, the tasting menu is an unbeatable bargain.

Shirosaka has all the trappings of a classic kaiseki restaurant: an immaculate wooden interior, a window that looks out onto a tranquil miniature garden, and a serious-faced chef working quietly behind the counter. Appearances, however, can be deceiving. Chef Hideki Ii is a man of few words, but his innovative cuisine speaks volumes.

Ii combines traditional and modern techniques in a finely tooled style of kappo-ryori (kaiseki’s less formal cousin) that is unconstrained by rules and reflective of his peripatetic wanderings. Born in Tokyo, he trained at Tetsuya in Sydney before spending three years in New York cooking for the Japanese ambassador. Since opening Shirosaka in late 2014, Ii has gone from strength to strength. The menu sparkles with signatures such as the spherical rice cracker perched on a mound of sliced squid and vegetables. Lift the lid of the cracker, and you’ll find a quail’s egg yolk and trout caviar nestled into a bed of diced tuna, uni, and dashi gelée. The dish is almost too pretty to eat, but Ii instructs you to smash the orb and mix everything together – delicious destruction. The ebi-soba – a tangle of thin noodles tossed with fried sakura-ebi prawns and coated in a slick of fragrant oil infused with shrimp shells – is a seasonal specialty we’d happily devour every day. Oyako-don is typically made with chicken and scrambled egg (the “mother and child reunion” that inspired the Paul Simon song), but Ii uses smoky grilled sardine sprinkled with its briny offspring, tiny white shirasu blanched in seawater. Another convention subtly defied.

The drinks list changes frequently and offers a short but respectable selection of sake, though they often run out of some of the more popular bottles. Service is personable but professional, and the mixed crowd strikes a happy balance of local- and international guests. By 9pm, the place hums with bonhomie.