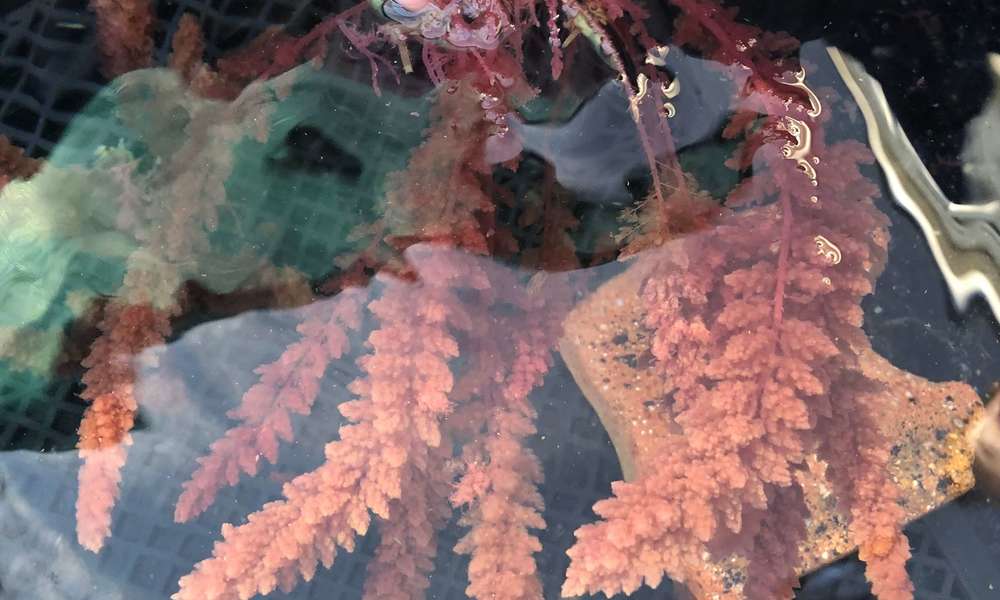 Across coastal areas, seaweed has likely been used as animal fodder since time immemorial. These past few years, there’s been a renewed interest in this tradition as new research is being spearheaded by a number of international groups.

In 2016, the British scientific journal Nature published a study titled “The Potential Role of Seaweeds in the Natural Manipulation of Rumen Fermentation and Methane Production”.  Five different kinds of seaweed – sugar kelp, golden kelp, sea lettuce and two types of red algae – were added to animal fodder and the observed results lead to the conclusion that seaweed can indeed potentially reduce the methane emission in cows and other ruminants, though the study also deduced that more research is required to analyze the nutritional and environmental benefits of using seaweed as feed.

Lately, particularly positive results come from tests using the tropical red seaweed Asparagopsis armata, native to the Southern hemisphere, but introduced to both the Atlantic Ocean and the Mediterranean. Its active agent, bromoform, is a compound that blocks the production of methane when mixed in with the regular silage of cows, sheep, goats and other ruminants.

”Our research, and that of collaborations at UC Davis and Penn State in the US, shows that not only can we greatly reduce emissions from ruminants with up to 99 percent or more in some trials, but we can also increase productivity of animal growth or increase feed efficiency. We're currently working with seaweed growers and are in the process of establishing the commercial enterprise Futurefeed, with the aim of offering the world’s first low carbon beef and dairy within a couple of years.”

From a gastronomic standpoint, a crucial question is of course whether this change of diet affects the flavor of the cows’ milk and meat. Though tests have been conducted, no results have been published.

”We’ve conducted organoleptic testing … the results are in the final phase of manuscript peer review and are expected to be published within weeks” says Dr. Kinley. ”However, I will reveal that there was no difference in the quality of the meat. Although I might be considered biased, I found that cows whose feed was fortified with seaweed produced a more tender and favorable steak. On the other hand, all the animals on a high barley-content basal finisher-diet produced fantastic meat, so when it’s that good it’s hard to significantly improve it further. No residues of seaweed bioactives could be found in meat, milk, fat, organs, or faecal matter.”

Despite encouraging results, there are problems to be solved and questions to be answered. As Dr. Alex Hristov, Professor of Dairy Nutrition in the Department of Animal Science at Penn State University, points out in an article in the Penn State News, there’s little or no knowledge of the long-term effectiveness of bolstering feed with seaweed.

"The microbes in cows' rumens can adapt to a lot of things. There is a long history of feed additives that the microbes adapt to and effectiveness disappears. Whether it is with beef or dairy cows, long-term studies are needed to see if compounds in the seaweed continue to disrupt the microbes' ability to make methane."

He also points out that if seaweed fodder were to be used to make a global difference, the scale of its production would have to be gigantic, given the world’s more than 1,5 billion cows, many of which can be found in the US. If using only wild Asparagopsis, the oceans’ supplies would soon be depleted. And if cultivated, it would have to be done sustainably.