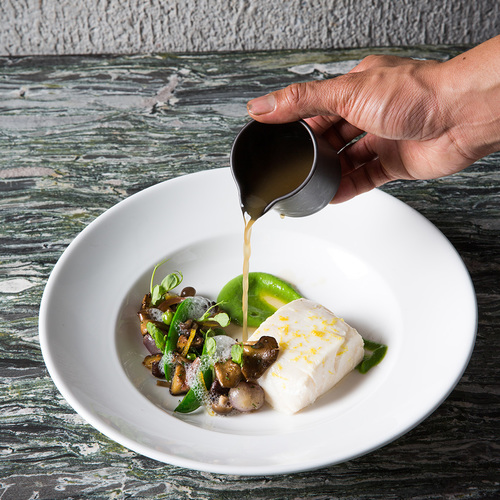 To look out for: Major-league cocktails, craft beers on tap, out of the ordinary wines

It wasn’t the first time that a short holiday jaunt to Asia ended with a chef putting down roots in Thailand. But when gifted Filipino-American Arnie Marcella fell for Bangkok, and decided to relocate here, he set his sights high on adding to the expanding landscape of chef-driven eateries in the city.

Raised in upstate New York, Marcella trained close to home, at the renowned Culinary Institute of America, then cut his teeth with apprenticeships in Mexico and Italy before spending a decade at some of New York City’s hottest eateries. He opened the doors at Bunker in early 2016, where at the heart of the kitchen is a diverse selection of local produce. He sources in the wild and from a remarkable network of organic growers, touring local markets and farms, including Thailand’s celebrated Royal Projects, to personally connect with purveyors. And what he can’t source locally Marcella endeavors to grow in Bunker’s own rooftop garden.

Both Eastern and Western influences are evident in the menu, which pays homage to a sense of community and encourages family-style dining, sharing like the locals do.

One standout dish, Locally Grown, features at any given time 25 to 35 seasonal, locally-grown or foraged, fruits and vegetables, both cooked and raw, indigenous as well as Western varieties grown in Thailand, including some rare, exotic weeds that most locals don’t even know exist. Calling the dish a salad doesn’t do it justice. It’s multi-layered, multi-textural, with inventive toppings to season off the masterpiece.

Highlights from the mains include a Butterscotch Pork Belly with delicate sweet potato, kale and a pork skin crumble. Marcella’s desserts feature a clever Banana Rum Baba dressed with spiced rum and puffed barley, finished with a delectably rich banana toffee ice cream, and Black & Blue, a full-bodied black sesame cream puff with blueberry jam and sake that does not bruise the taste buds.

Bunker sports a smartly-designed, industrial decor with bare concrete walls, rustic-rusted iron bracings and a beveled-slot front window reminiscent of a World War Two “pillbox” emplacement. From the sophisticated ground floor bar to multiple indoor and outdoor dining spaces on the upper floors the place is something of a maze, and there was a clear attempt to leave things unadorned in an architectural style some call “brutalism.”

In all its parts, Bunker provides a welcome glimpse into the future of casual fine dining in Bangkok.