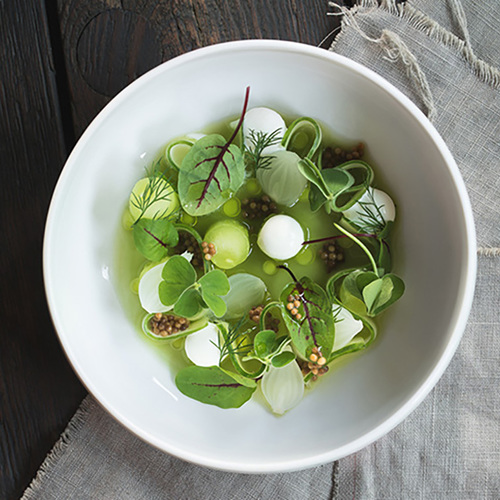 “The Other “East meets West” ”

The Other “East meets West”

Reason to go: Your traditional German favorites, reinvented in unexpected and improved ways

To look out for: The homemade lemonades and non-alcoholic cocktails, good enough to make you go straight-edge

Growing up on different sides of the Wall, Chefs Martin Müller and Kristof Mulack know every facet of Berlin’s traditional gastronomy, from Kreuzberg's Turkish döner to old-school German knödel, from Russian home cooking to the flavorful noodle soups provided by Vietnamese guest workers residing in the East. At Tisk––named after an Old High German word for table––the toques interpret their childhood memories in contemporary ways, utilizing local ingredients and far-flung influences. Calling it New German cuisine would be too broad, this is New Wave Berliner cooking.

The corner restaurant in an up-and-coming part of Neukölln appears as a mirage with its tiled and Mediterranean-colored, open kitchen where Müller and Mulack helm the stoves, the former calm, composed and focused, the latter an entertainer and national celebrity,  known for winning the cooking show The Taste. Sit at the bar, and Mulack will regal you with stories.

Together, the culinary duo present international mash-ups; baked beets accompanied by an airy foam made with ayran, a Turkish, salty yoghurt beverage; deconstructed Russian spicy-sour solyanka soup; and the fair Prussian meatballs Königsberger Klopse, tinted with a touch of Auslese.  Instead of a plain mixed salad, a quartz butterhead is dressed with capers, salty lemon zest and a generous scoop of caviar. The grilled chicken, however, is a straight-up déjà vue of family dinner at granny’s, it’s served whole and crispy-skinned, dressed with carefully steamed vegetables, mashed potatoes and gravy, as well as rich blood sausage croquettes garnished with pickled red onion and apple sauce.

Presentations are aesthetic but more hands-on than flamboyant. The same goes for the wine list where you will find sleek local picks, as opposed to the newest unfiltered funky orange.  The bartenders, some of which look like they came straight to work from techno-Mecca Berghain, know how to craft a proper cocktail but also excel in serving surprising non-alcoholic tipples.

This is a place to come home to, regardless of where you come from.