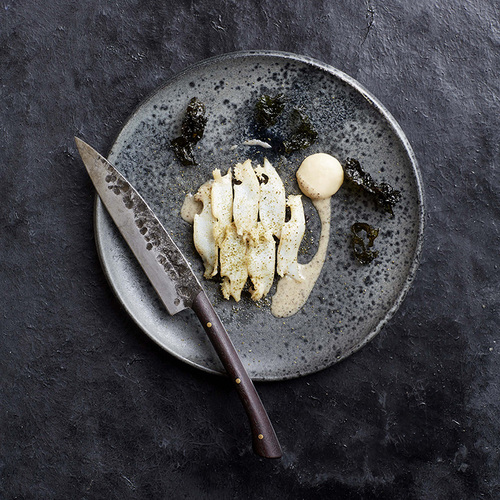 “A most intricate marriage of cuisines”

Claim to fame: Scoring every conceivable national style award to be had
Reason to go: A most intricate marriage of cuisines
To look out for: On-point wine pairings

Cape Town’s historic Church Square is where you start this journey, hopping into an old steel elevator that brings you to the 5th floor of the iconic Speaker’s Corner building. Step through a darkly mysterious space and into a breathtakingly beautiful room with an open kitchen and floor-to-ceiling, triple story glass windows framing a one-of-a kind combo view of towering Table Mountain and regal Lion’s Head. It’s no wonder FYN is racking up every national style award with its warm interiors, a soaring space made cosy by a playful installation of wooden spheres, strung like beads from the high ceiling.

Executive Chef and Owner, Peter Tempelhoff, was once at the culinary helm of the Liz McGrath Collection and is best known for the award-winning Greenhouse Restaurant at Constantia’s Cellars-Hohenort. In late 2018, his burning desire for a restaurant of his own moved him into the city where in record time, FYN’s steel and glass structure was built from scratch. He’s aided by top chef Ashley Moss who co-creates the complex plates.

It’s a highly unlikely but curiously clever combination of South African and Japanese flavors, fuelled by Templehoff’s obsession with both countries. There’s an interplay of cuisines like no other, executed with pinpoint precision. Canapés are brought out bento-box style and include daikon ‘maki’ with spinach, chili and sancho. Guineafowl yakitori are Cape Malay Bo Kaap-spiced; tiny brick pastry cones are filled with smoked snoek and apple; and prawn crudo is dressed with naartjie glaze and dashi flakes. Bread is celebrated as a stand-alone course and is fashioned as traditional African pot-bread, accompanied by a crooked copper bowl burner with melted bone marrow butter. Kaiseki trays include baby bowls of ‘ramen’ noodles made from chokka, served in a gentle squid broth topped with a quail egg. Yellowfin tuna is sustainably caught, seared for a second, sliced and plated with fois gras, dressed with apricot gel, craft miso and smoked kelp jelly. The gin and tonic palate cleaner is sheer theatrics; the tonic is local but the craft gin is from an ancient, Japanese distillery and brings six Nipponese botanicals to the palate. Mains include Purdon farm wagyu sourced from the high mountains of the Eastern Cape, the heavily marbled Angus beef is accompanied by waterblommetjies (little water flowers), kombu and biltong (dried meat). Waves of sweet bites include white coffee crème brûlée and Madagascan chocolate shards, salted Japanese plum and fennel ice cream.

Co-owner Jennifer Hugé spent 17 years as manager and sommelier at the award-winning La Colombe, she runs her brigade of service staff with French style precision. Not going for her fine-tuned wine-pairing is sacrilege, though an impressive 20-page wine list celebrates the best of the nearby Cape Winelands region, some iconic global greats and the finest Japanese whiskies. Hugé recently won the Eat Out’s Outstanding Contribution to Service Award; she’s a force to be reckoned with.