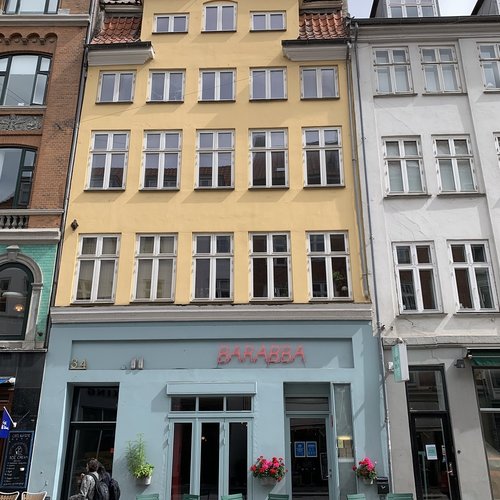 “There is no place else in Copenhagen serving food this good this late at night. ”

Claim to fame: The no-time-to-waste and nothing–to-lose attitude of an Italian sommelier, poached from London by Team Noma

Reason to go:  The hours. There is no place else in Copenhagen serving food this good this late at night.

To look out for: Barabba is only open Wednesday through Sunday

Riccardo Marcon has guts. Not only did he walk away from a plum job at London’s grande dame Claridges to become head sommelier at a startup bistro in Copenhagen (that would be 108), he moved again a year or so later, this time to launch his own place, together with the group behind Pluto, on a strip of Store Kongensgade hardly known for its cuisine. But within weeks Barabba was buzzing, embraced both by restaurant industry denizens who appreciate its late hours, and normal Copenhageners who come for its soulful, southern Italian cooking and its exciting range of mostly natural Italian wines.

In the open kitchen, chef Marco Cappelletti has a deft hand with classics from the region, emphasizing their big flavors, but updating them with unexpected twists. A tartare showered in black truffle gets its punchiness not only from anchovy cream and sweetly crunchy pearl onions, but from the meat itself: an ever-so-gamey venison rather than the common beef.  A fat tentacle of octopus is grilled to that perfect point between mealy and tough, and curves seductively next to an herbaceous variety of flowering broccoli whose bitterness offsets the cephalopod’s mildness.   Pastas are a standout, made by hand so they retain a slight chewiness, and paired with imaginative fillings or toppings. Envelope-shaped plin are stuffed with a marmalade-like smoked aubergine, and jolted awake with bottarga; pumpkin gnocchi swim in an umami-rich pool of parmesan water that is drizzled with Amaretto. A main course of wild boar rounds, succulent and deeply savory, gets a similar hint of sweetness from pine nuts and raisins that evoke Siciliy’s proximity to northern Africa.  And desserts by pastry chef Ianthi Michalaki, especially a luxurious hazelnut cream with tart yogurt crisp that she will probably never be allowed to take off the menu, maintain the pattern: authentic and comforting, but with that enlivening zap of imagination.

More cozy than chic, with daubed ochre walls and a lurid photo of Pavarotti dominating one wall, the room isn’t going to win any design awards.  But thanks to a long, convivial bar separating the front and back rooms, and the genuine warmth of the staff, the ambiance is nearly always electric; Barabba feels like the kind of place where a party could break out at any moment. Around midnight, when hungry cooks and waiters from the city’s other restaurants flood in to carboload and quaff glasses of volcanic wines, one often does.