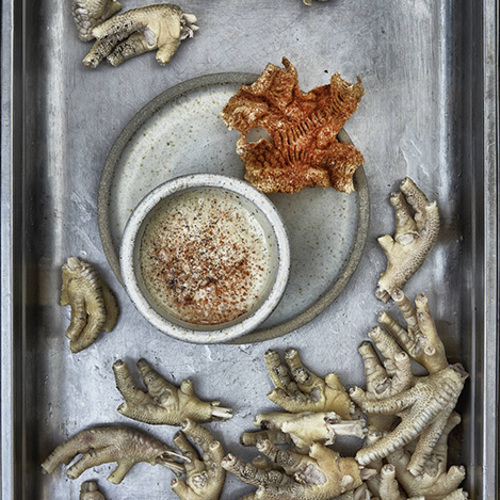 London’s envelope-pushing high roller has a thing for ham

Reason to go: The little nibbles – before, during, and after the announced courses – all deserve deep consideration

To look out for: This place is popular – be prepared to book and pay for the meal far in advance

Old municipal buildings often harbor unsavory skeletons in the cupboard. But at the Clove Club in the former Shoreditch Town Hall, you’ll pass a huge cupboard hung with a selection of succulent hams. Many of these meats are British; a few are displayed over the bar counter, like a tapas bar. Civic pride has been replaced by culinary ditto.

Chef Isaac McHale clearly dreams big, taking over this huge site in 2013 on a gamble that if you aim high, enough customers will come. Though his simple yet alluring seasonal and British ingredient combinations weren’t a immediate success, they most definitely are now. Clove Club is rightly recognized as one of London’s most progressive and influential restaurants. The establishment doesn’t just innovate on the plate. It was London’s first, in 2015, to introduce a controversial online book and pay in advance system. Despite this, it’s now so busy that even seats at the cocktail bar must be pre-booked. There’s a choice of dining rooms, both good; one with the open kitchen in full view, the other in the bar area. The £110 nine-course menu comes with a few more flourishes than the £75 five-course menu, but you needn’t worry about missing out on the slimmer option; even our ‘five-course’ menu amounted to 14 dishes when amuses, petits fours and other ‘gifts’ were included.

McHale grew up in Orkney, an archipelago of rugged islands off the north-eastern coast of Scotland. He gives a nod to his heritage with the Scottish cliché of haggis, but also sends a subversive signal by serving it inside little buns made of fried yeasty dough, dusted with a dried cider powder. Fried food is another Scottish cliché, but here the kitchen’s taken Southern-style buttermilk fried chicken and seasoned it with pine salt, serving it in a basket of fresh pine twigs to give it a Caledonian flavor. These, and two other refreshing appetizers arrive before the listed dishes even begin. Hay-smoked trout tartare smells of autumn fields ablaze, with a poured-over potato soup releasing outdoorsy aromas. A fillet of sea bass gets its campfire smokiness from hazel wood-grilling, the texture and flavor balanced with a slick of celeriac purée, radish, and some of their in-house bacon. To underline the kitchen’s interest in cured meats, a few slivers of British-made ventrèche arrive unbidden.

Although this succession of dishes demands your attention, be sure to make the acquaintance of sommelier Guy Palmer-Brown. He is a genius at not only pairing dishes with wines by the glass, but also in gauging your level of interest and adventure. He can steer you towards some deeply rewarding and unorthodox wines; for example a Sylvaner that has been allowed skin contact, resulting in an orange hue, but that isn’t an ‘orange wine’. The sommelier’s matching abilities are demonstrated by a ‘course’ of 1908 Madeira, which you sip most of; then the remainder is diluted by a pheasant consommé poured from a decanter. Simply brilliant, like everything else about Clove Club.

The desserts include a sundae glass of Kampot pepper ice cream topped with a layer of Amalfi ‘lemonade’, which is deeply refreshing without inducing a sugar rush. Guests may leave the Clove Club having spent a week’s earnings on dinner, but they leave content; delighted, even.