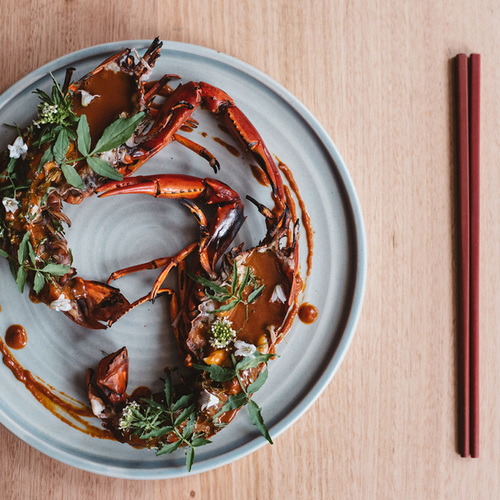 “Malaysian and Indonesian classics given a new lease on life”

A Colorful Patchwork of Island Flavors

Claim to fame: Malaysian and Indonesian classics given a new lease on life

Reason to go:  A dazzling blast of flavors

Look out for: Vegemite coconut curry (!)

Rendang, otak otak, sambal. No sane person would argue that these dishes aren’t among the most flavorsome the canon of world cuisine has to offer us, yet their appearance on menus at the kind of restaurants that have interesting drinks lists, designer interiors and chefs with a serious following on Instagram is curiously infrequent.

Sunda is here to redress that balance. And it does so with aplomb. Nothing about the decor reads Southeast Asian, mind you––whether classic or contemporary. The fit-out of the laneway site could be called construction-site chic, its matrix of steel struts and sheets of plywood providing a crisply neutral backdrop to the menu’s wild colors.

Chef Khanh Nguyen calls himself Genghis Khanh on Instagram. He cut a swathe through some of Sydney’s most demanding kitchens, Becasse, Mr Wong and Bentley among them. His cuisine makes bold raids across borders into Indonesia, Vietnam, Malaysia and China, but also brings native Australian ingredients into play––a passion fired up, perhaps, during his time with the Noma Australia brigade.

Sometimes those ingredients are the accent: tart riberries lending zing to a snack of tempeh, tofu curds and palm sugar, for instance, or bush tomato joining the dots with octopus and a lemongrass-fragrant sambal.. Elsewhere on the menu those indigenous ingredients land center-plate: Western Australian marron, the crustacean sweet under a feisty belacan butter and Vietnamese mint, or cured kangaroo scooped up on slivers of witlof,

And in happier instances still, Australian produce is both the lead and support acts: Sydney rock oysters bathed with coconut curry vinaigrette and flavored with pepper-leaf from Tasmania, say, or the superb signature take on otak otak, a luscious parfait of spanner crab lifted to a great height by the perfume of finger lime.

This is no East-meets-West grafting experiment, either. Australia may be an Anglophone nation, but geographically it is contiguous with South East Asia, and through his menus Nguyen makes a convincing case for a cuisine that connects the country with its near neighbors to the north––Papua, Malaysian, Indonesia, home to the very islands that give the restaurant its name––rather than its colonial masters on the other side of the globe.