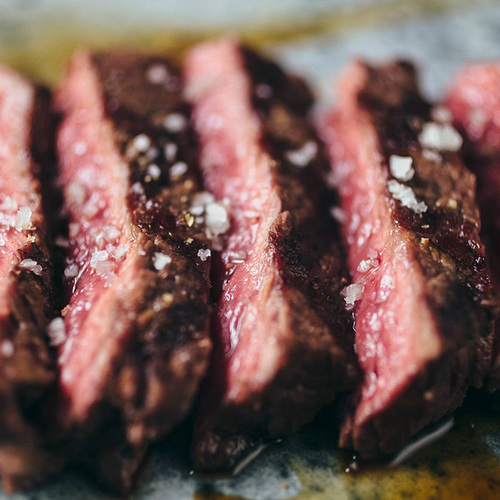 Reason to go: To give the vegetarian pursuit a middle finger while sipping “RAW” wine from a Zalto glass

To look out for: Alternative steak and the wine du jour

The interior of Max’s Beef for Money (Has anyone ever pronounced the restaurant name in full?) brings to mind a designer bomb shelter that’s survived both the nuclear winter and prohibition. On one side there is the dry ageing chamber filled with full-sized, dressed carcasses, on the other a what-the-hell kitchen. Right in the middle stands a red lacquered table that looks as if it’s been flooded with beef-, or if you’re Stephen King-morbid, human blood. There are wine bottles everywhere. The gothic ambiance is thick too as the room is quite dark and feels like a ceremonial hall in a Frankish castle, with cases of Domain de la Romanée Conti hidden in the cellar. Indeed, they are actually hidden here somewhere.

The menu looks a lot like a torture chamber-carte du jour. Fancy something chopped? Get a tartare. Craving a bit of stabbing? Order a Piemontese battuta. Now calmly put down your knife and move on to experimenting with heat, starting with low temperatures: roast beef is cooked at 55 degrees, sweetbreads at 70, calf’s head at 80, cheeks just one degree hotter. And to finish it off, the hellfire of your choice: burned, grilled, seared, pan-fried, whatever!

Here’s the funny thing though, there are actually a few vegetable dishes lurking in this general carnage, the dirt candy comes from the owner’s garden where he practices biodynamic cultivation, something he picked up in Burgundy. Baked peppers with cheese, burrata with raspberries, and cauliflower soup with the Georgian herb- and spice blend ‘Svan salt’. All are worth trying, even though it’s probably safe to assume that Max’s blood-thirsty guests don’t come here for tender sprouts, they’re here for the juicy chunks of meat and bottles of natural wine, oh so full of life.

Vladimir Basov is the mastermind behind this bona fide, all out-meat eatery. He once held the title of best sommelier in Moscow, back when Muscovites ordered mulled wine made with 1975 Petrus. Now he owns a few restaurants as well as the importing company Real Authentic Wines or simply RAW, and both capitals’ beloved watering holes known simply as The Big Wine Freaks.

Being a passionate natural wine-advocate, Basov realized that the best pairing for unconventional clarets and pinot noirs that continue to ferment even after they’ve been poured into stemware, are unconventional, private stock-steaks––Max’s meat comes from the restaurant’s own farm close to Saint Petersburg.

And lest you were wondering, Max is the butcher, the one who dresses the dramatic carcasses mentioned above.