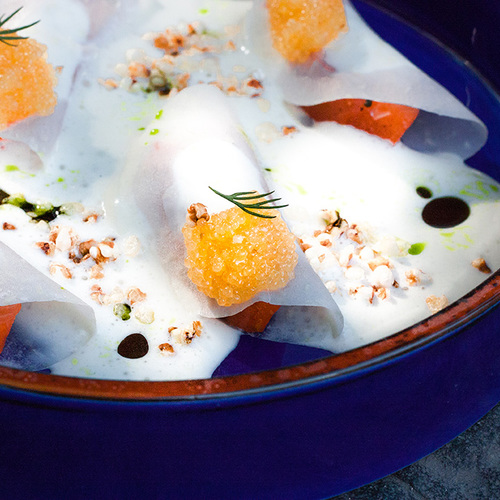 The Trojan worm of Moscow

Reason to go: If you want an incognito place, this is it, the dark interior will swallow you whole

To look out for: A pastrami dish that rivals the best of New York’s legendary ditto

It’s hard to say why somebody would design a dark interior in the era of Instagram––how are we supposed to take photos of our food? Severyane’s interior is not just dark, it’s as inky as Malevich’s “Black Square”. This is probably not a coincidence. The waiters’ outfits and the color scheme of the dishes also clearly refer to the Russian painter’s suprematist art. The idea behind the concept is obvious: Severyane means Northerners, and in the North of Russia the sun either doesn’t go down or doesn’t come up at all, depending on whether it’s polar day or polar night. The owners of Severyane chose the night as their inspiration, they love nights out above all! Imagine it’s damn cold and dark outside, this is your savior, here you’ve got a proper Russian stove, and that means warmth and food.

A fair amount of the food at Severyane is cooked exactly that way; baked or roasted in the oven and then left overnight while the stove slowly gets colder. So all the elements come together––silly winter, darkness, the warmth of a stylish hearth, then pickles and Russian preserves, roots––both real and metaphorical, Meat and fish. All the foods eaten in winter, in abundance.

But don’t get us wrong, it’s not all gloom and doom, after all, you are in the fashionable city of Moscow, in one of its most fashionable areas. Chef Georgi Trojan has come up with a very elegant menu, supported by vast list of distilled tipples and natural, wines, a bill of fare that is aiming to demonstrate both the versatility of the local ingredients and the possibilities of a traditional Russian wood-fired oven. The meaning of “local” in Russia is as vast as the expanse from Kaliningrad to Sakhalin, as mind-boggling as the list of Russian nationalities.

Take for instance the baked eggplants with kimchi cream sauce. It definitely sounds and tastes Korean, but there’s a catch here as there’s actually a significant Korean population in Russia. They’ve been here since the 19th century, the government granted them land, and they lead peaceful peasant lives, burning wood in Russian ovens and fermenting kimchi in Russian barrels. Nowadays Sakhalin locals even make shchi with kimchi.

Another course, pumpkin with seed pesto interprets the food habits of the Russians, in an ironic way. Pumpkin- and sunflower seeds are a popular snack, a symbol of a lazy pastime, something munched on while watching life trickle by. And there you have it! A sauce AND a gastronomic joke.

Just like his namesake, Trojan worm, this chef found his way to the operating system of the Moscow restaurant scene, and started installing new‚ or rather, long forgotten ingredients and techniques. But unlike computer viruses, Trojan only ameliorates the capital’s restaurant scene.