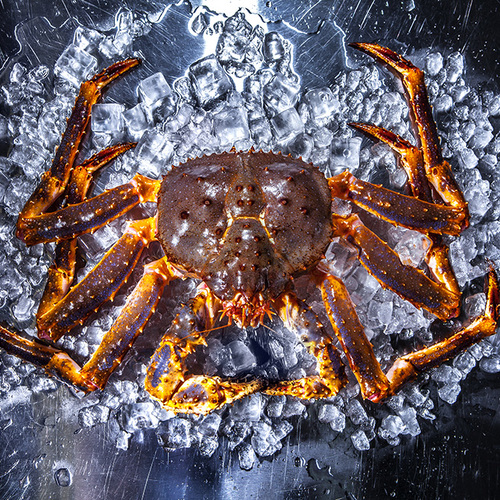 “Crustacean heaven in the city’s netherworld”

Claim to fame: Crustacean heaven in the city’s netherworld

Reason to go: To match crab’s nine with proper wine

To look out for: Beauty and the beast; Adjika crab

Wine and Crab sits among absolute values: the sparkling windows of Gucci, Prada and the other usual glam-suspects whose shiny “come-hither-shenanigans” make you blind and almost unable to locate the restaurant’s less-ritzy burrow. Don't despair, it’s there, this Crab merely dug its claws into the vaulted basement.

The concept of Wine and Crab is as clear as its name: lots of crab and lots of wine. There are nine varieties of the crustacean on the menu, from horsehair crab to spiny king. And there are almost a thousand wine labels; instead of a printed beverage list you get an iPad, making it easier to navigate.

Au naturel. That’s the best way to sample crabs, steamed or boiled in seawater. Luckily, you can savor all nine types in one go for just 9000 roubles, a serving that will keep a party of four busy for just a moment. That said, the restaurant’s menu is developed by the Berezutskiys chefs, of innovative Twin Garden, a duo that couldn’t resist the temptation of using pliable crabmeat for their cutting edge experiments. So, should you get fed up with plain crabs (let’s make that crazy assumption), go for “Wine Baba”, a classic baba, soaked in Nino Franco prosecco (not the cheap kind!), cut in half and stuffed with a mix of crab meat, tomatoes, and seaweed. You’ll remember the damn thing for a lifetime; the sweetness of the wine-soaked dough meets the vivid umami taste of the crustaceans and their accouterments––and boom!––it’s a drug you’ll be forever addicted to.

Another dish to check out is weird and risky “Adjika crab”. Adjika is an Abkhaz seasoning made of red chilies, coriander, fenugreek, garlic and salt, ground between two stones, it’s not exactly a refined product: on a gastronomic elegance-scale of 1 to 10 it would probably fail to even score a 1. But an interesting thing happens here: the adjika adds a soupçon of oriental flavors to the crab without turning it into kebab. The chefs themselves come from the south of Russia where adjika is a very basic thing, unlike crab, and still, they manage to wed those two very different things, in the same way that the upstairs glamour is married to the vaulted simplicity of this downstairs establishment. Shopaholics are Wine and Crab’s best and most loyal customers.